Agents on scene claimed a backpack abandoned on a sidewalk was a “suspicious package,” closing the Pennsylvania Avenue pedestrian mall in front of the White House, and the adjoining Lafayette Park, from protesters and tourists. All pedestrian traffic, including media, was forced to retreat to side streets.

After waiting on the sidewalk behind the police line for about half an hour, a middle-aged woman came forward to claim the backpack, telling agents that she had put her small bag on the ground so she could take a photograph with her family. She declined to be interviewed.

The protesters had a National Park Service protest permit from 10 a.m. to noon. Agents began clearing the crowd at 10:43 a.m., giving little information to protesters and tourists as they forced them out of the area.

Organizer Oliver Darcy told The Daily Caller that he didn’t believe the protest’s premature end was an accident. Darcy noted that he and others were demanding the president fire his attorney general over a scandal the White House doesn’t want to talk about.

“To me, it seems like a bit of an overreaction to evacuate the entire — like — I don’t know. Was the White House evacuated?” Darcy said.

“On Pennsylvania Avenue, they shut the entire block down, you know? From my judgment, it seemed like an overreaction, but I don’t work for the Secret Service and I know they take this stuff very seriously.”

“It did seem very odd that during a protest of Attorney General Eric Holder and Barack Obama in front of the White House that all of a sudden there was a mysterious bag left — accidentally, right?” Darcy continued.

“I really don’t know, but she [the backpack’s owner] looked like she was pretty sincere that she left it accidentally, but I’m not a secret service agent so I don’t know what the protocol is. … I’ve taken part in multiple protests in front of the Supreme Court, in front of the Capitol Building, in front of the White House. Never have I seen anything like this before.”

Secret Service spokesman Brian Leary told The Daily Caller later that law enforcement was not trying to chill protesters’ free speech rights. “We had an unattended package, and we cleared it for public safety,” he said.

Leary admitted the “unattended package” turned out to be “absolutely nothing.”

“We responded as we always do with our SOP [standard operating procedure],” Leary said.

Leary said the Secret Service would not “characterize” the package but made the decision to close down the area out of “an abundance of caution.”

Leary added that the Secret Service has “unattended packages frequently around the White House complex,” and called Monday’s reaction “standard.”

“We frequently deal with unattended packages at the White House complex and that’s the way we respond to all of them,” he said.

Protesters were outside the White House Monday to demand President Obama fire Holder and release documents related to Operation Fast and Furious that he has concealed from congressional investigators by asserting executive privilege.

They chanted “No Justice, No Peace” and “Remember Brian Terry,” a reference to the U.S. Border Patrol agent who was murdered with weapons Holder’s Department of Justice and Bureau of Alcohol, Tobacco, Firearms and Explosives provided to a Mexican drug cartel as part of the ill-fated Fast and Furious “gunwalking” operation.

Protesters’ signs include “This is a big f**king deal,” “Don’t shoot me, bro!” “Release the documents!” and “Watergate didn’t have a body count!”

Click the image to see more photos from the protest: 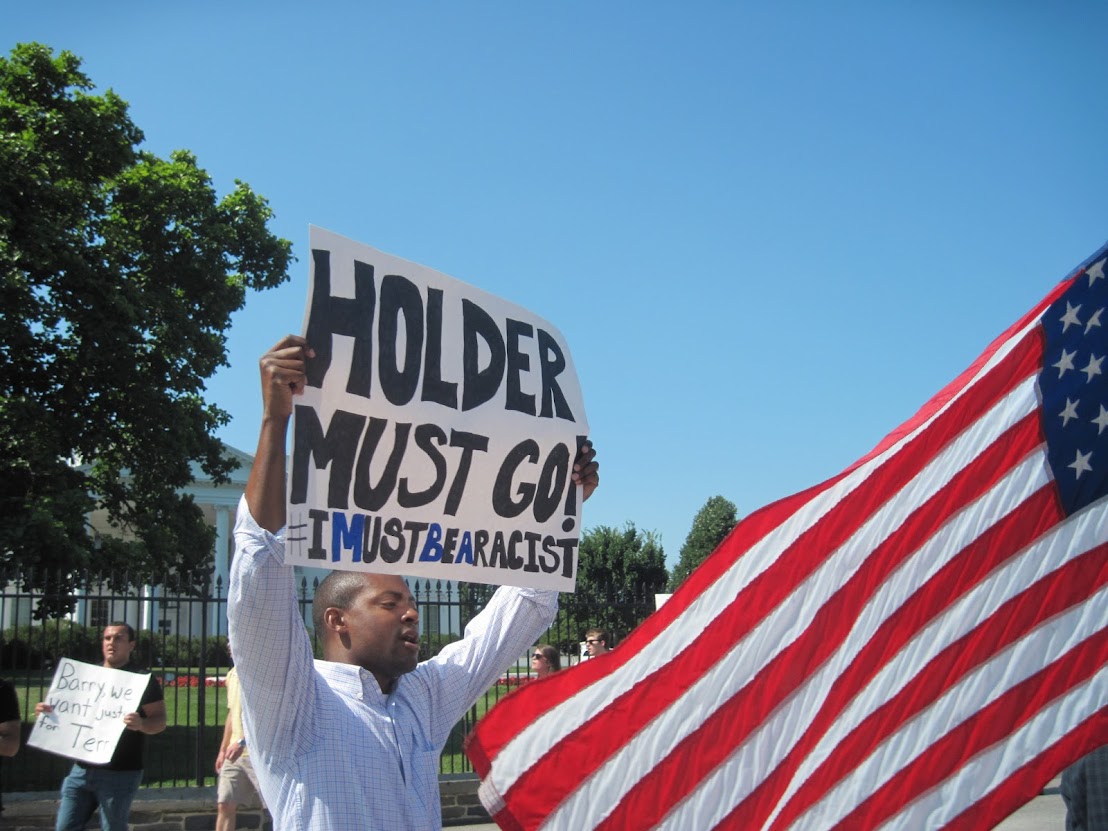