When I was growing up, I viewed guns—all guns—with an equal degree of awe and enthusiasm. One such rifle that turned my extremely impressionable 7-year-old head was the Armalite AR-7 Explorer survival rifle. Perhaps one of the most well-known survival rifles ever created, the AR-7 was originally designed by M16-creator Eugene Stoner, and has seen service with U.S. Air Force pilots and aircrewmen as a survival rifle since 1959. With its hollow stock and takedown capability, for me it was puppy love at first sight. After all, it was the same rifle Sean Connery used to thwart an enemy helicopter attack in the James Bond film, “From Russia, With Love.” Pitted against such modularity, not to mention the weighty cinematic endorsement of a British super spy, my Ruger 10/22 suddenly paled in comparison.

Thankfully, you don’t need to be a globe-hopping secret agent searching Istanbul for a Russian decoding machine or an adolescent newcomer to shooting (although the fun associated with a .22 LR has a tendency to bring out the kid in all of us) to see the benefits of the AR-7’s latest incarnation, manufactured by Henry Repeating Arms. Just as the U.S. Survival AR-7 doesn’t fall into the category of clandestine hardware, it doesn’t really match the urban-emergency/zombie-apocalypse category of firearms commonly found in the gun press today.Rather, it is better suited to serve as an emergency-survival tool—the type of supplementary gear you’d want with you during tough times, whether lost while backpacking through sparsely populated wilderness, piloting a bush plane over Alaska’s untamed landscape when an engine fails or when your car’s radiator explodes stranding you 100 miles outside of Tucson. In any such situation, you may be on your own for quite a while. Lightweight and pack-friendly, the Henry AR-7 provides protection and the ability to procure food until you’re out of danger or rescued.

Perhaps the AR-7’s most notable feature is its action, barrel, receiver and two eight-shot magazines can be disassembled and stored inside its hollow ABS-synthetic stock. The manufacturer claims the stock can float—partially due to the water-resistant seal created when the removable rubber buttpad is installed and also thanks to its interior foam lining.

Measuring 16.5 inches disassembled and weighing a mere 3.5 pounds, the rifle is a compact package that easily fits within the confines of your backpack or inside a vehicle’s storage compartment without taking up vital real estate. As a means of offering greater protection from the elements, the rifle’s stainless steel barrel is covered in ABS polymer, while the receiver sports a Teflon coating. 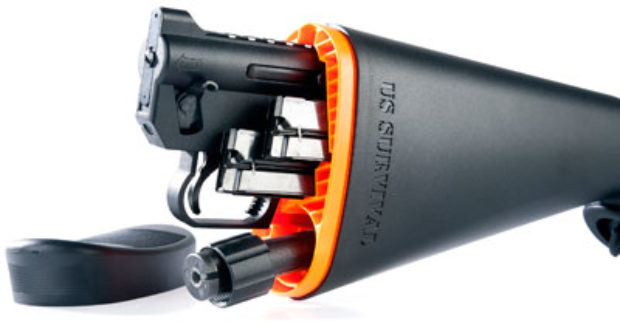 With a compact, self-contained, takedown design, it’s no wonder the AR-7 has been popular among outdoor enthusiasts for more than 50 years.
–

Assembly is easy and takes less than a minute. The receiver fits into a notch on the stock, which is slightly off-center. While some may initially consider it a design flaw, in reality the offset is necessary to accommodate the AR-7’s components inside the stock. Attach the receiver to the stock, and tighten the setscrew until the receiver is firmly anchored. Then insert the barrel into the end of the receiver, making sure to align the post on the top of the barrel with the notch in the receiver. Next, screw on the barrel nut until it bottoms out against the receiver. Finally, insert the magazine. Now the action can be cycled to load a round.

While the AR-7 has remained virtually unchanged from Stoner’s half-century-old design, Henry offers some contemporary refinements, which serve to make this great rifle even better. An integral, 3⁄8-inch accessory rail accepts rings for a conventional riflescope or a red-dot sight. While there’s not enough room to store an optic inside the stock, the AR-7 does allow for the enhanced precision a riflescope can provide. There’s also a slot for an extra magazine in the buttstock, providing greater on-board ammo capacity than the original AR-7. Lastly, the U.S. Survival AR-7 features a bright-orange front-sight insert, which is secured by a dovetail and easier to pick up in the rear peep-style aperture. 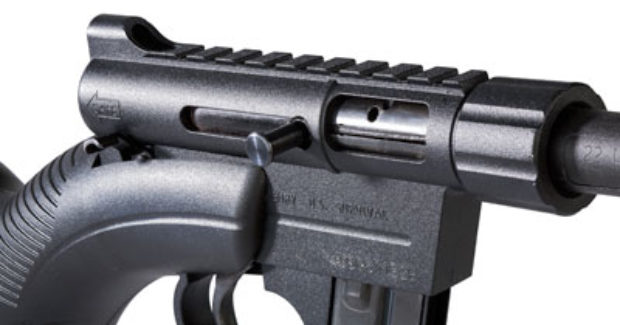 The addition of a built-in optics rail adds a new degree of versatility to the AR-7’s classic design.
–

In spite of the bright contrast between the front- and rear-sight assemblies, I selected a 3-9×40 mm riflescope for accuracy testing, thinking it would provide adequate magnification for anything from defensive use to harvesting small game at intermediate ranges. Needless to say, the Henry U.S. Survival AR-7 proved an absolute joy to shoot. Range performance was quite good, with perfect reliability and decent accuracy at 50 yards. Despite a substantial amount of take-up—which posed a challenge during accuracy testing—the AR-7’s trigger, although slightly on the heavy side, had a clean let-off. The rifle showed a slight dislike for lightweight, lead-free bullets. Groups hovered between 1.35 and 3.90 inches at 50 yards, which is accurate enough to harvest small game at closer distances. Equally important, the rifle returned to zero after disassembly. My only complaint concerns the inability to adjust the rifle’s heavy trigger pull.

While a .22 LR may not be the first choice as a survival rifle, the Henry U.S. Survival AR-7 possesses a level of James Bond-like modularity that keeps it close at hand. It could be a lifesaver should adverse circumstances arise.

Velocity measured in fps at the muzzle for 10 consecutive shots with an Oehler Model 36 chronograph. Temperature: 80 degrees Fahrenheit. Accuracy measured in inches for five consecutive, five-shot groups at 50 yards from a benchrest.