Thunderheads gathered in the low country of Northern Florida, the sky transforming into that eerie, green phosphorescence from lightning electrons stockpiling polarity. Meteorologists predicted the 48-hour deluge, but the looming monstrosity of the storm amazed and alarmed.

The two days we had originally planned to evaluate the Blaser F3 four-barrel set at Honey Lake Plantation would now be compressed into a few hours. What we didn’t anticipate is that the revised timetable would actually highlight the F3’s quick-change artistry. 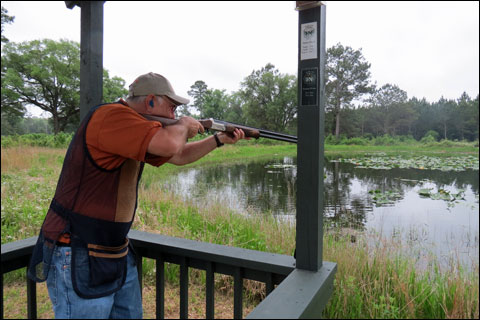 As thunder boomed through roiling clouds we scrambled to complete the Sport Shooting Multiplex at Honey Lake Plantation in Greenville. The clays playground included five-stand, trap, skeet and a 12-station sporting clays course. 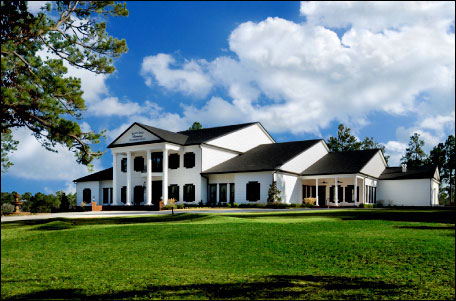 The 4,700-acre property was home to impressive bobwhite quail hunting and exceptional fishing in stocked lakes. Mr. Williamson is an active sportsman and demanded Honey Lake Planation meet his high expectations for frequent personal use.

We had started out after breakfast by loading the oversized Blaser F3 hard case and an assortment of shotgun shells onto the truck-based bird buggie. With Mr. Monahan behind the wheel our conversation immediately concerned the weather. Driving to the Sport Shooting Multiplex, the sky radiated sunlit blue with an outlying underbelly of grey tumult. At the time, we trusted the prediction of a favorable afternoon and so planned a full day that would begin with five-stand, trap and skeet, followed by lunch of regional cooking in the plantation’s Whispering Pines Restaurant, then head out again for sporting clays. Sand bags never entered the discussion. 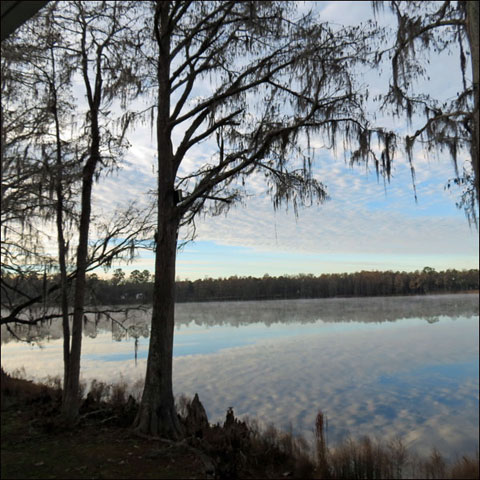 Instead, Blaser has engineered a modular system around the F3’s 12-gauge frame. In addition to saving money, the four-barrel Blaser F3 should deliver consistent performance because the different gauge, 30-inch barrels all weigh 3¼ pounds. Identically weighted barrels in several gauges are important for competitive clays shooters who often rely on sub-gauge tube sets, which add mass that impacts swing.  And if you opt to swap barrels on a single receiver, it’s difficult to maintain precise weight continuity let’s say between 30-inch 12-gauge and 20-gauge barrels. 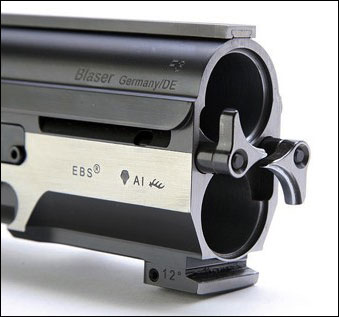 The compact monobloc of the Blaser F3 contributes the shotgun’s low profile.

Blaser credits its state-of-the-art CNC machinery for the F3 barrel compatibility also offered on the company’s R8 bolt-action rifle. You can order nearly 40 different caliber barrels for the R8 receiver. Modularity is a Blaser core principle.

If you’re unfamiliar with the Blaser F3, the German company introduced it to Americans in 2004. With the F3, Blaser created an over/under for the 21st century (see Shotgun Life story “The Renegade Genius of the Blaser F3”).

The shotgun was lauded for its low profile, unique horizontal hammers, barrel interchangeability and effortless mechanical triggers that average 3.8 pounds pull. Blaser subsequently packaged a barrel and stock weight-balancing system for individual customization. The F3’s horizontal hammers (sometimes called plungers and strikers) hit the shotshell primer with a short jab for rapid lock times. The linear travel of the hammers enables both a quicker, center-line strike (ignition) and lower profile compared with the conventional pivoting hammers of over/unders. Most shotgun ejectors cock the springs upon closing the shotgun. The Blaser F3 actuates the ejectors when the shot is fired and the gun opened (Ejector Ball System), which minimizes resistance when closing the gun for the next shot. 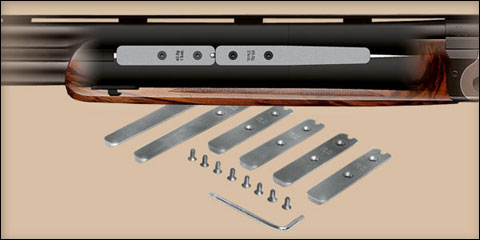 The barrel weight system of the Blaser F3.

The Blaser F3 at hand was a Luxus model — a grade above the entry level Standard. The 8.2-pound Blaser F3 is available in six grades that escalate in ornamentation and walnut.

The Luxus grade receiver of the Blaser F3.

Of course you can begin with a single-barrel Blaser F3 and over time purchase additional barrels for approximately $3,000 each — assembling the full set at your convenience.

The adjustable stock-balancing weight system in the Blaser F3.

The Blaser F3 under evaluation included four, 30-inch, flat-ribbed barrels with a HIVIZ front bead. Each barrel arrived with Briley Spectrum chokes in popular constrictions. We discovered that two forends worked fine (one for 12 and 20 gauge, the other for 28 gauge and .410).

When we reached the five-stand, a presently clear sky and faint breeze sweet with the fragrance of wetlands lulled us into that optimistic warmth hunters savor on those blessed mornings. Our plan called for starting with the 12-gauge barrels on five-stand, skeet and trap — repeating the drill as we stepped down in gauges. Improved Cylinder and Light Modified became the universal chokes of choice in a nod to uniformity.

The author shoots the Blaser F3 on the five stand course of Honey Lake Planation.

The experiment was purely qualitative. I would focus on consistency of swing, mount and point of impact — attempting to “feel” fluctuations in the shooting experience between barrels. I would also evaluate variations in sight picture. In theory, the alignment between rib, beads and eyes would be comparable regardless of barrel. I wanted to test if the different barrels varied in resistance along the trunnions and monoblock underlug bite, as well as the integrity of the forend hardware. Would the Blaser F3 become a wrestling match going from barrel to barrel?

Over the next few hours, I shot the Blaser F3 in several gauges at numerous targets. The combination of five stand, trap and skeet threw incomers from a far-away tower, a low-house skeet shot that seemed four feet away from the cage, a chandelle and the usual assortment of standard presentations.

I asked Ms. Wittholt to try the 28-gauge and .410 barrels. As a new shooter she missed most targets, but more importantly the Blaser F3 didn’t kick. 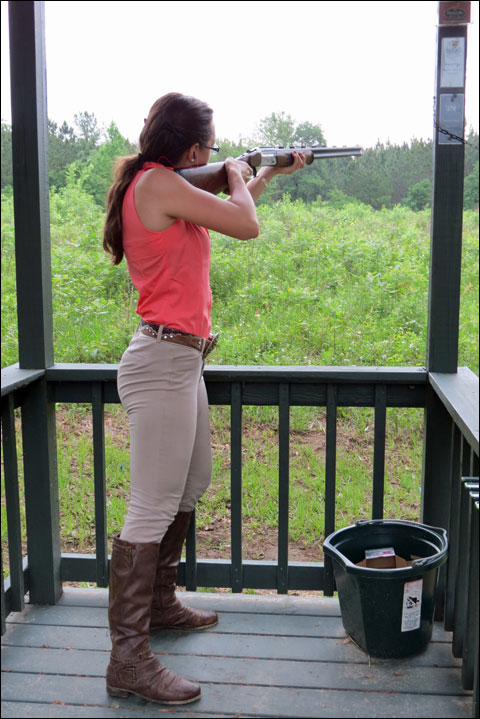 The 28-gauge and .410 were a joy (imagine the stability of a 12 gauge). We had previously evaluated the 20-gauge and 28-gauge Blaser F3, but in a flurry of mixing them with the 12-guage and 20-gauge barrels it became apparent that all gauges shared nearly identical shooting characteristics.

When the wind started jerking around the targets we realized how rapidly the storm had raced in behind us. Suddenly, the dark front appeared combustible, like smoke plumes from a nearby bombing run. Thunder, lightning and rain were imminent. A weather check on the iPhone revealed an exponential jump in the hour-by-hour precipitation compared with the forecast when we started earlier that morning. Worse, the following day would be a wash out.

We had not shot the sporting clays course yet, but decided to go for it until bad rain or hazardous lightning sent us packing. Urgency dictated we shoot the course backwards, starting at station 12.

Soon the storm turned angry. Wind knocked about distant incomers, droppers, teals and wobble-trap outgoers. Ominous thunder seemed to vibrate the ground. Rather than use all four barrels per station as intended, I changed out two of them in a haphazard trade of 12 and .410 or 20 and 28 or any combination that struck me at the time: just grab a barrel and install it. The air turned syrupy followed by big, juicy raindrops. Finally, at station 3 the rain came hard and we returned to the Gathering Hall.

Back in my room on the plantation, I wiped and oiled the F3. That’s when I realized how easily the barrels swapped out as we raced through the sporting clays course. Rushing to beat the storm, the interchangeability proved itself in the time crunch. Without manhandling or cussing, the entire barrel system of the Blaser F3 functioned flawlessly as promised.

Irwin Greenstein is the Publisher of Shotgun Life. He is an NSCA Level I instructor as well an NRA Certified Shotgun Instructor and certified in the Coordinated Shooting Method. You can reach him at contact@shotgunlife.com.