O.F. Mossberg & Sons is producing a new semi-auto equipped with a unique European walnut stock designed to fit most family members – as women in particular benefit from the anticipated sub-$1,000 “street price.”

The shotgun’s hallmark is a distinctive stock whose innovative measurements were formulated by Gil Ash, the celebrated shotgun instructor and visionary who has pioneered the marriage of brain research and high-tech into the curriculum of the OSP Shooting School in Fulshear, Texas.

In another industry advance, Mossberg’s anticipated shotgun is packaged with a complementary two-month subscription to the OSP School Knowledge Vault – an online repository of more than 800 OSP wing and clays training videos (filmed with a ShotKam II HD gun barrel camera) and animations as well as how-to articles, blogs and book excerpts (currently 4,000 pages of written data) by Gil and Vicki Ash.

This makes the upcoming Mossberg shotgun the first to include an owner’s manual that addresses gun safety, assembly and maintenance as well as instructions for using it on the clays range and in the field. 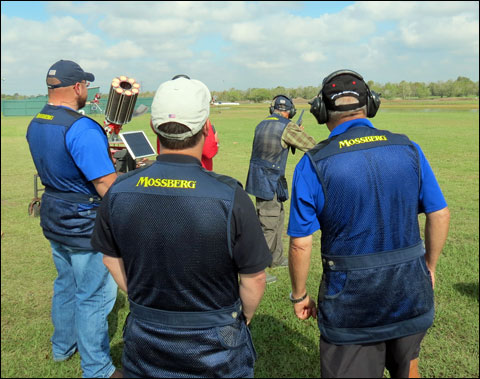 Mossberg officials said the 12-gauge gas shotgun will be announced and displayed at the 2016 SHOT Show, held January 19-22 at the Sands Expo Center in Las Vegas, Nevada. Mossberg’s exhibition booth is number 12734. At the time of our briefing Mossberg has no plans to manufacture a 20-gauge version. First shipments of the Mossberg’s family shotgun are slated for early March 2016.

As demonstrated to a handful of industry journalists at the OSP facility at the American Shooting Center in Houston, Texas, prototypes of the new Mossberg family shotgun were able to fit all the participants – including several women plus Mr. Ash’s business partner and wife, Vicki Ash.

The Mossberg value proposition stands to undermine the women’s shotguns from Syren USA – an offshoot of Italy’s FABARM and Caesar Guerini. Syren touts its dedicated female stock configurations on Guerini/FABRM derived models that range in price from $1,995 to $5,500. By contrast, the new Mossberg semi-auto with a suggested retail price of $1,000 provides comfort and fit for women by virtue of Mr. Ash’s research. 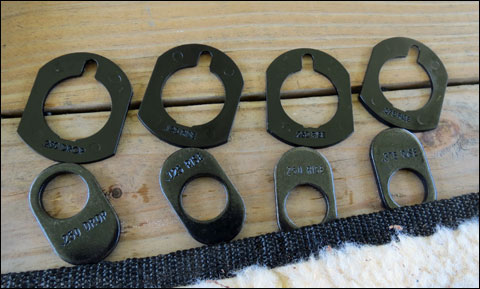 A quick photo of the shims expected to be bundled with the upcoming Mossberg “family” shotgun. The shim on the bottom left says “drop” to indicate that the stock can actually be lowered to fit more people right out of the box.

The Mossberg stock is complemented by a shim kit that affords a wide range of drop-at-comb dimensions and commensurate pitch. In conjunction, the relaxed slope of the Prince of Wales grip naturally accommodates different hand positions, Mr. Ash explained. Plus the slender sporting forend enabled swing control by shooters with smaller hands.

Better yet, whereas the Syren shotguns are female-specific, Mossberg’s shotgun can be used by just about anyone in the family of reasonable height. For example, during the media demonstration, the shotgun fit a 300-pound male and an average-size woman, who was actually decimating difficult shots such as 40-yard, quartering-away rabbit targets partially obscured by a grass growth spurt from the torrential downpours that had pounded the region just prior to our arrival.

Bottom line: women no longer have to spend $2,000 and up for a gender-specific shotgun. Instead, the forthcoming Mossberg semi-auto rationalizes the price across family members – making it far more practical and affordable. 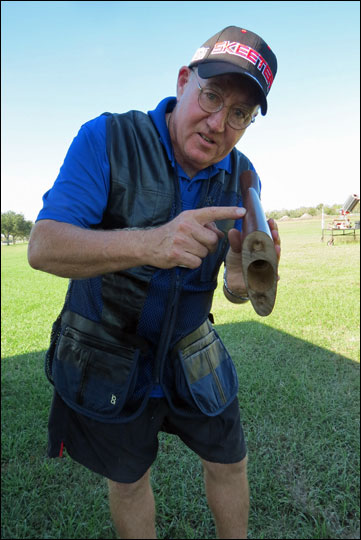 Gil Ash gives a sneak peek at the narrow width of the stock on the Mossberg “family” semi-auto.

Mr. Ash attributed the success of the stock to its narrow width and lower drop. He said it was 30-40 percent thinner than average. In turn, the thinner, lower stock virtually eliminates the cast concerns which figure into fit issues for women wing and clays shooters. Consequently, there is no adjustable comb. To make the point, both Mr. Ash and his son Brian shot the gun left-handed and right-handed.

The correct pitch is equally as important for women to prevent the recoil-pad heel from digging into the tender areas after a shot is triggered. The collaboration between Mr. Ash and Mossberg addresses pitch with the bundled shim kit that adjusts the angle and elevation of the stock – including the ability to actually lower the stock from its delivered 50/50 point of impact.

Mossberg’s Director of Marketing, David Miles, said of the semi-auto “We needed to get to the point of having a shotgun that would work with everybody out of the box.” 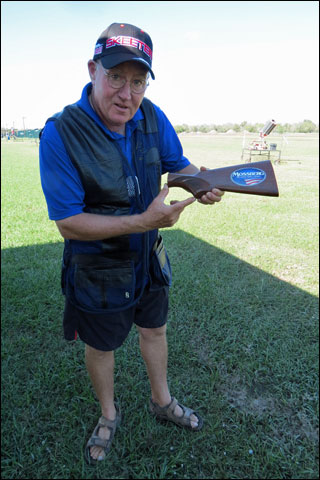 Gil Ash highlights the Prince of Wales grip on the new Mossberg shotgun.

On the clays field, we spent an entire day shooting the new Mossberg. Mr. and Mrs. Ash, along with their son Brian, wanted to demonstrate new instructional methods and the shotgun’s capability on long clays presentations.

The flat-shooting Mossberg eliminated the on-the-fly target trigonomics that most enthusiasts perform with their higher-shooting sporting shotguns. In debunking the defacto acceptance of target float by clays shooters, Mr. Ash contended that the 50/50 point of impact on a sporting gun enhanced focus along the line of the target, especially as it pertained to forward allowance.

The shotgun’s balance held steady at the seam of the forend and the slate-gray receiver. The trigger pull was close to 4½ pounds with zero creep. The 7¾-pound shotgun performed quite well with a smooth swing and clear sight picture. 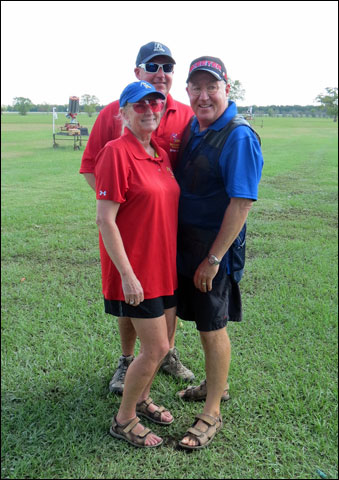 Comfort was impressive. Although we experimented with ⅞-ounce loads to demonstrate a full spectrum of cycling, the majority of the shells expended during the course of the day were 1⅛-ounces at 1145-1200 feet per second. I can say that at the end of the marathon there was absolutely no soreness to the cheek, jaw or shoulder. And that’s with a $1,000 shotgun!

Will the impending Mossberg semi-auto family shotgun be a game-changer? We’ll find out in March.

The web site for the OSP Shooting School