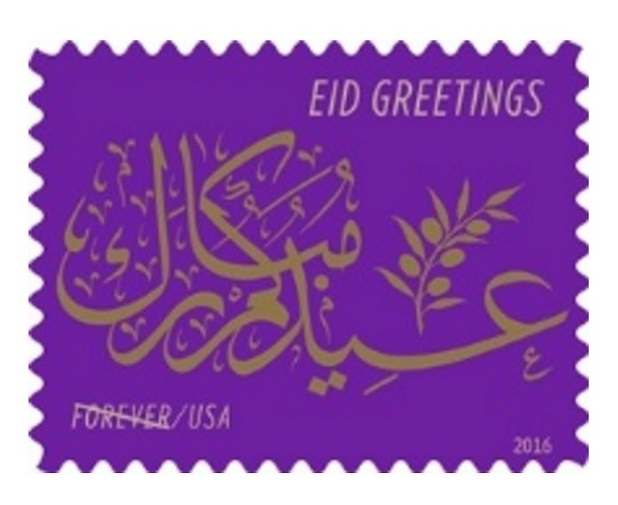 It’s a brand new year, America, and the U.S. Postal Service has just introduced its annual batch of 2016 stamps.

Among the stamps is a purple-and-gold stamp celebrating the two most significant festivals in Islam: Eid al-Fitr and Eid al-Adha.

The stamp’s gold calligraphy (by Mohamed Zakaria of Arlington, Va.) reads Eidukum mumbarak, which translates as: “May your Eid be bountiful (or blessed).”

The stamp features no actual imagery other than the calligraphy and a few words in English.

Eid al-Adha honors Abraham’s willingness to sacrifice his son on God’s command. As part of the holiday, Muslims who can afford it are expected to sacrifice their best domestic animal (cow, goat, camel, sheep, etc., depending on the region).

The two Muslim holidays change dates every year because they follow the lunar calendar of Islam. (In 2016, Eid al-Adha occurs in September and Ramadan runs basically for the month of June.)

Islam is not the only religion featured in the 2016 stamp collection.

There are two Christmas stamps. One shows a silhouetted nativity scene. Another is a detail of a “Madonna and Child” painting by an unknown 15th-century artist.

Sikhs, Buddhists and followers of various other religions don’t appear to be getting any stamps honoring their belief systems for the upcoming year.

There is, however, a Kwanzaa stamp. Kwanzaa is a holiday created in 1966 by a leftist professor, Maulana Karenga, who was convicted in 1971 for felonious assault and false imprisonment for beating two nude women with an electrical cord. Karenga spent four years in prison.

“Our stamps articulate the American experience through miniature works of art,” acting stamp services director Mary-Anne Penner said in a press release. “Our diverse stamp topics for 2016 are sure to appeal to everyone.”

Other stamps in the 2016 collection include one with a portrait Richard Allen (1760–1831), a black minister who founded the African Methodist Episcopal Church, and one with a portrait of Jaime Escalante, the math teacher made famous in the movie “Stand and Deliver” (featuring a young Lou Diamond Phillips).