The billion real estate mogul spotted a man wearing a Tom Brady themed Trump shirt which spurred the comments during a Monday night rally at the University of Massachusetts – Lowell’s Tsongas Center, according to CBS Boston. (VIDEO: Tom Brady — ‘I Support’ Trump … ‘That’s All I Have To Say About That’)

“Remember this, Tom Brady injured is still better than anybody else,” Trump said of the four-time NFL Super Bowl Champion.

Trump later added, “He’s a champ, and he’s a winner, and that’s what we need in this country. We need people like that.”

Trump seem enamored with the shirt worn by his supporter, and said in part, “Oh, I love that man. It says Trump and Tom Brady, look, together. I love Tom Brady.” (RELATED: Black Sports Commentator Respects ‘The Hell Out Of’ Tom Brady For Supporting Trump [VIDEO]) 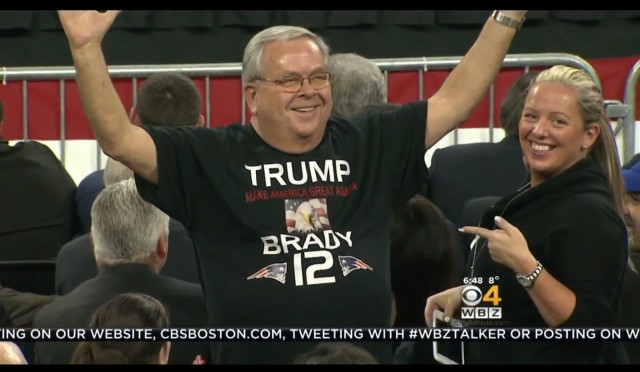 The leading Republican candidate also said he wants to get the shirt for himself. Brady has admitted to being friends with Trump for a long time, but as of late has not been warm to answering questions about The Donald. (RELATED: Tom Brady Is Done Talking Trump, OWNS Liberal Media For Daring To Ask … [VIDEO])