A sign posted on the front door of the shop informs customers prices will be raised on the first of the year, because of a January minimum wage hike and resulting price increases for food products, equipment and other supplies.

“As you may be aware, the Company has not increased prices in many years even despite the minimum wage increase in 2014 and associated supplier and operating cost increases,” the sign reads. “However, due to a second minimum wage increase in the last 18 months going into effect on January 1st, and a second round of accompanying increases in food products, equipment, and other supplies by vendors also affected by the increases, the Company can no longer freeze its prices.” 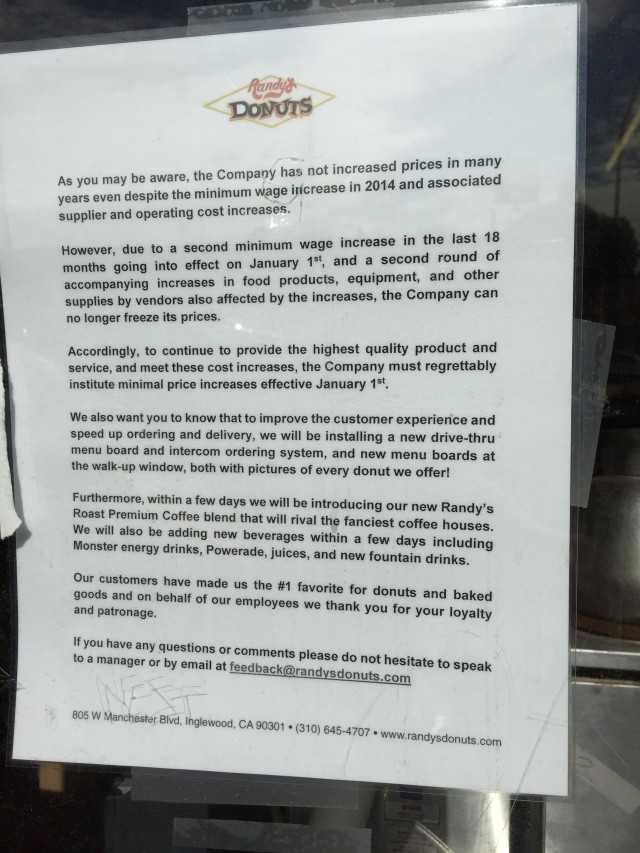 Randy’s Donuts president Mark Kelegian told The Daily Caller News Foundation most items only increased in price by 10 cents. “The price increase is minimal,” he said. But he declined to comment on whether the coming, much more substantial, minimum wage hike would lead to another increase in prices.

“The customers have not complained about the price increase and generally have been very understanding of the need to increase prices,” he added. “They also recognize that it has been many years since the last minimal increase. Many acknowledged that they expected prices to increase as they have elsewhere.”

“Randy’s regrets these minimal increases and values our customer’s loyalty and patronage,” he added.