The Bureau of Alcohol, Tobacco, Firearms and Explosives (ATF) fell victim to an embarrassing cascade of ridicule on Facebook over its efforts to explain President Barack Obama’s new gun control executive order.

The guide’s publication, though, attracted a rather devastating piece of wit from a Facebook user going by Bre Ve. 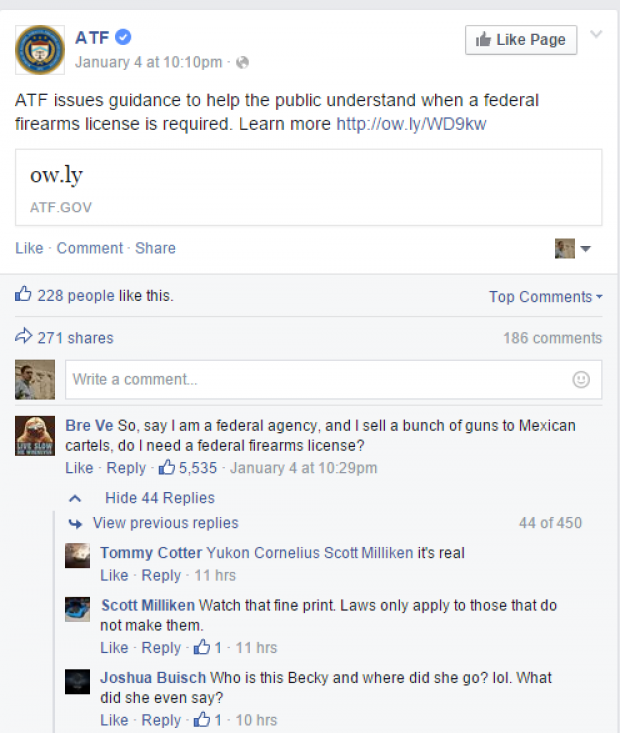 Bre Ve’s comment, of course, references Operation Fast and Furious, where ATF’s Arizona field office instructed gun stores to let illegal straw purchasers purchase guns and then smuggle them to Mexican drug cartels, in the hopes the guns could be traced to high-level cartel members who could then be arrested.

The scheme was almost a total failure, as more than a thousand guns went missing, no cartel leaders were arrested, and dozens of Mexicans were killed or injured by the smuggled guns. One of the guns was used in the murder of Border Patrol agent Brian Terry. Even as ATF was deliberately allowing guns to be smuggled south of the border, the bureau discussed using the gun smuggling as a justification for increased gun control measures.

[dcquiz] The quip has attracted over 5,500 likes, a colossal amount considering the ATF itself has only 22,000 followers and the post itself has less than 250 likes.

That’s not the only example this week of ATF taking self-inflicted damage on Facebook. On Tuesday, the day Obama discussed circumventing Congress with an executive order on guns, the agency published a guide to the federal rulemaking progress, which clearly states only Congress can drive the creation of new regulations.