Environmentalists are pushing a Stanford University study they claim proves the economy could run on 100 percent green energy, but they must not have realized the study also shows nearly 1.2 million Americans permanently out of work.

Stanford professor Mark Jacobson published a study last summer claiming “each of the 50 United States to convert their all-purpose energy systems… to ones powered entirely by wind, water, and sunlight” by 2050. The study is touted by environmental groups and liberal news outlets featured Jacobson saying things like going 100 percent green “will create 22 million more jobs worldwide than the fossil economy.”

But Jacobson’s study doesn’t show net job increases anywhere close to what he claims, according to an investigation by Energy In Depth (EID) — an oil and gas industry-backed education project. EID dug into Jacobson’s data and found the professor’s study actually shows 3.8 million Americans put out of work. A greener America would only add 2.6 million long-term jobs — that’s a net loss of 1.2 million jobs.

“In transportation, more than 2.4 million men and women would be put out of work. Over 800,000 people working to produce oil and natural gas would lose their jobs,” according to EID’s Steve Everley. “Nearly 90,000 jobs connected to coal mining would be wiped out. All told, more than 3.8 million jobs would be lost, far more than the nearly 2.6 million long-term jobs that Jacobson has estimated would be created.” 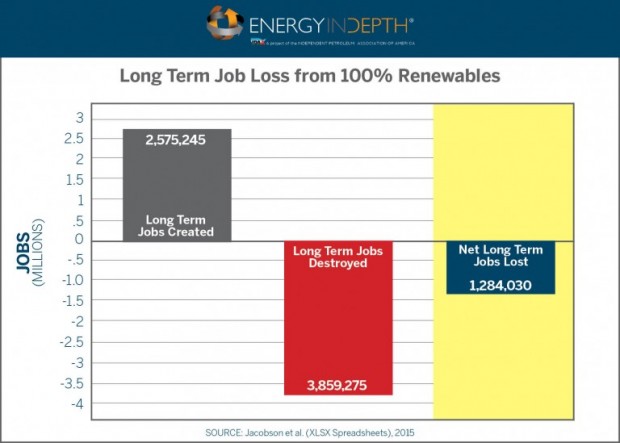 And the job losses won’t be spread evenly throughout the economy. Even states already aggressively mandating green energy will be hit.

“Other states would also see huge losses,” Everley notes. “Texas, the country’s largest oil and natural gas producer, would shed more than a quarter million long-term jobs by transitioning to 100 percent renewables. In Wyoming, the largest coal producing state, the transition would destroy more than 32,000 jobs connected to the energy sector.”

Interestingly enough, green groups have ignored this inconvenient truth about a study claiming the U.S. will prosper using only green energy.

Anti-fracking filmmaker Josh Fox feature Jacobson’s work in his “Gasland” film series. Fox even went on a tour last year to tout green energy and said it “can benefit culture and democracy as well as being the next major economic development force.”

Greenpeace says Jacobson’s plan is “the answer to alarming climate science” and will “eliminate most all air pollution and global warming, create jobs, and provide energy stability and energy price stability.”