The guidelines are a set of rules for law enforcement to abide by when conducting investigations into certain unlawful activity.

The NYPD investigative guideline changes come at a time amid a rash of ISIS-inspired attacks on law enforcement and civilians in America.

The modification of the guidelines is a result of what is required by as part of a settlement of lawsuits accusing the NYPD of improperly investigating Muslim groups. Although the city did not admit “to engaging in any improper practices, the changes represent an effort to provide more detailed guidance to NYPD personnel within the existing Handschu Guidelines,” New York Mayor Bill de Blasio’s office said.

The mayor’s office added, “These include explicitly incorporating police policies against religious profiling, adding a provision for considering the impact investigations have on people who are not targets of investigations, establishing reasonable time limits for certain investigations, and adding a civilian member to an internal NYPD Handschu Committee.”

“As part of the settlement, the NYPD has also agreed to remove from its website the 2007 report ‘Radicalization in the West,’ which the NYPD does not and never has relied upon to open or extend investigations.”

The guideline referencing protection of Constitutional rights added the language:

“[C]are be exercised in the conduct of those investigations so as to protect constitutional rights, including the right to be free from investigation in which race, religion, or ethnicity is a substantial or motivating factor.”

And, “that investigations not intrude upon rights of expression or association in a manner that discriminates on the basis of race, religion or ethnicity, where such discrimination is a substantial or motivating factor for the investigation.”

Additionally, the guideline for what is permitted as a “lawful investigative technique” was altered in the following way: 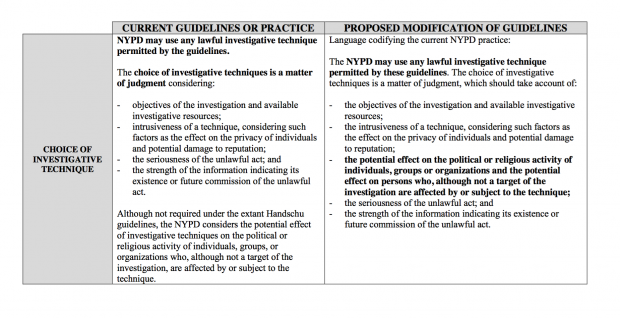 New York Police Commissioner Bill Bratton praised the proposed changes, saying in a statement that the modifications bring the NYPD up to federal FBI standards.

“Incorporating existing NYPD practices into the Handschu Guidelines makes it easier to maintain best practices in intelligence gathering and investigations. The modifications also bring the guidelines closer in line with FBI practices, which is helpful in working collaboratively with our federal partners,” Bratton said.

However, the FBI’s Touchstone training document was altered by then-Attorney General’s Eric Holder’s Justice Department in 2011.

The document required that training programs for agents that are not “overbroad, equating an entire religion, nation, region, or culture with evil or violence. For example, it is incorrect and damaging to assert that all Muslims have terrorist ties.”

In fact, one of the FBI standards that their agents must abide by is to recognize that “mere association with organizations that demonstrate both legitimate (advocacy) and illicit (violent extremism) objectives should not automatically result in a determination that the associated individual is acting in furtherance of the organization’s illicit objective(s).” 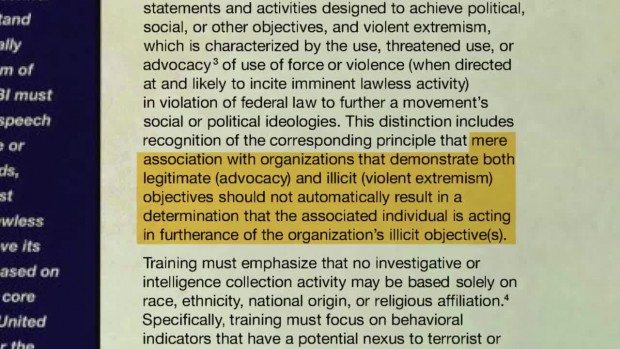 “Under the FBI’s published ‘Touchstone’ standard, you can be associated with an organization that supports or engages in violent extremism, but as long that group engages in some kind of “advocacy,” for investigative or training purposes you can’t presume someone supporting that group endorses their ‘violent extremism’ despite their known association with it,” counterterrorism expert Patrick Poole told The Daily Caller.

“These are the kinds of bizarre FBI policies that the NYPD has apparently signed on to. And we wonder why Americans keep dying?”

De Blasio took heat criticism the modifications of the guidelines. The mayor told WNYC’s Brian Lehrer that the only way to deter any further ISIS inspired terrorist attacks is to “deepen the relationship” with the “Muslim community.”

“There’s a lot to be done to offer a positive opportunity for deeper connection with the community – that’s why we did, for example, for every reason fairness and also deepening the relationship with the community – we changed the school calendar and we recognize the two Eid holidays – that should have been recognized long ago by any normal measure because they’re just as important in their tradition as the key Jewish and Christian holidays are,” he said.