Bureaucrats pushed $197 billion in regulatory costs in 2015, including $99 billion in costs due to finalized regulations on industries covering energy producers to food companies to manufacturers. In total, regulators wrote 82,036 pages of rules in the Federal Register last year — a record level. 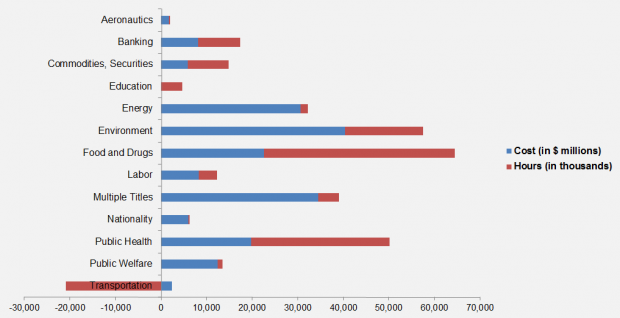 “But beyond these topline numbers, there are real impacts for individuals, businesses, and local governments,” Batkins writes. “Tighter efficiency standards inevitably mean more expensive goods for consumers. More paperwork might mean a business must decide between an expansion or devoting more time to regulatory compliance. New federal rules might place even more of a strain on state budgets.”

EPA regulators also finalized the so-called Clean Power Plan (CPP), which is expected to cost $8.4 billion per year, according to agency estimates. Coal industry estimates, however, show the rule could end up costing up to $79 billion from higher energy costs alone.

The Department of Energy also imposed one of the most expensive regulations last year — a rule mandating more energy-efficient fluorescent lamps. That rule is projected to cost $13.5 billion and increase the price of lamps $12 a piece.

The Obama administration, however, argues that while its regulations are costly, they yield billions more in benefits. AAF found “$89.6 billion in proposed and final rule annual benefits, compared to $32.3 billion in annual rulemaking costs.” But most of these “benefits” were from the dubious benefits claimed in the CPP for reducing coal use.