The New York Daily News ran a front-page headline telling Sen. [crscore]Ted Cruz[/crscore] to “Drop Dead,” alongside a Photoshopped picture of the Statue of Liberty giving Cruz the finger.

Friday’s front-page headline had the kicker, “Hey, Cruz: You Don’t like N.Y Values? Go back to Canada!” 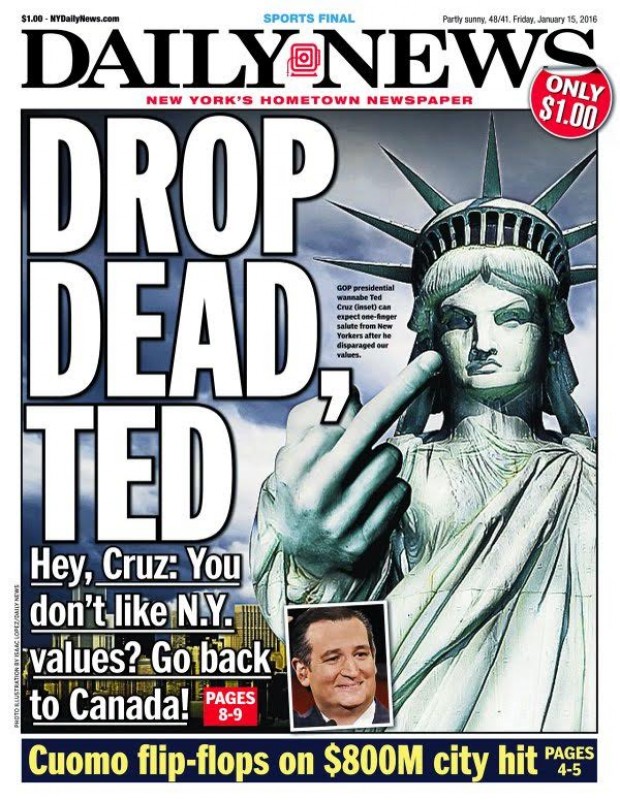 In December, the Daily News published a column saying one of the victims of the San Bernardino terror shooting was just as bad as the killers because he had spoken out against Islamic extremism on his Facebook page. (RELATED: NY Daily News: San Bernardino Victim Deserved It For Being Conservative)

The paper also ran the headline “God Isn’t Fixing This” in the aftermath of the San Bernardino terrorist attack. (RELATED: Media Mocks ‘Thoughts And Prayers’ For Shooting Victims, Democrats Don’t Offer Them)

And after a Virginia TV news reporter was killed on-air, the NY Daily News published stills of the shooting on its front page with the headline “Executed On Live TV.” (RELATED: Did This NY Daily News Cover On Va. Shooting Go Too Far?)