One thing that has helped keep the F-35 program going is a perception that there is no ‘Plane B.’ As Margaret Thatcher famously said,“There is no alternative.” No matter how bad the F-35 is, it is going to be built because the U.S. Air Force needs something to replace its worn-out fighters. That appears to be the fallback position in Lockheed Martin’s marketing plan for the F-35. The Department of Defence though is fully aware of the extraordinary cost of the F-35 relative to its performance and is looking to scale back its procurement.  That could result in a death spiral as falling numbers send unit costs through the roof.

This figure shows U.S. Air Force fighter and light bomber procurement from 1975 with a projection to 2030: 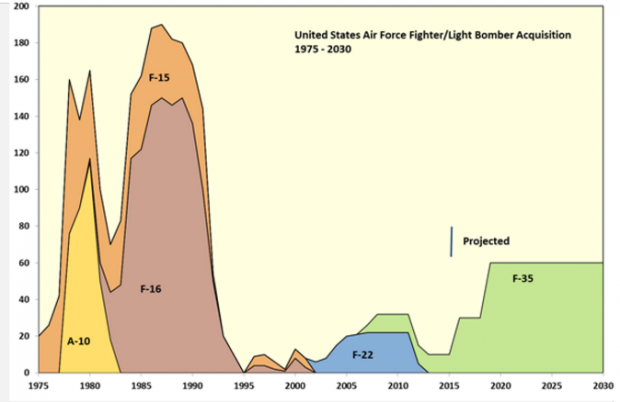 Most of the fighter fleet was built in the fifteen years from 1977 to 1992. Then the F-22 came along a decade ago. While it is a fabulous fighter when it is flying, it is too costly to fly. The F-22 takes 42 man-hours of maintenance for each hour in the air. About half of those maintenance hours are taken with repairing its radar-absorbent-material (RAM) coating. Availability has risen to 63 percent. F-22 pilots are restricted to 10 to 12 hours in the air per month due to an operating cost of $58,000 per hour, the Air Force simply can’t afford more than that. Ideally pilots would get at least twice that amount of flying time in order to be fully proficient in their weapon system.

So restarting the F-22 production line to make good the fighter aircraft shortfall is not the ideal solution. Arguably the cost of the F-22 has wiped out half of the U.S. fighter fleet even before the Russians or Chinese have had a chance to attack it. Simply due to its cost, what was to be a 750-strong fleet stalled at 187 aircraft; of that number, only 123 are ‘combat-coded.’ After the 63 percent availability figure, that means that there is one modern fighter per every 4.1 million Americans. Of course that is not enough. The U.S. Air Force is considering buying more F-16 and F-15 fighters. That is not a solution either. As General Mike Hostage, former commander of Air Combat Command said,“If you gave me all the money I needed to refurbish the F-15 and the F-16 fleets, they would still become tactically obsolete by the middle of the next decade. Our adversaries are building fleets that will overmatch our legacy fleet, no matter what I do, by the middle of the next decade.”

[dcquiz] The U.S. Air Force has been worshipping at the altar of stealth for over three decades, since the F-117 became operational in 1983. It was considered such a wonderful thing that it was deployed to South Korea in secret, only flew at night and so on. The F-117’s promise was borne out by its performance in Desert Storm in 1991. But things had changed by the end of that same decade. In Operation Allied Force against Serbia in 1999, one F-117 was shot down by a SAM battery and another was mission-killed by the same battery. The stealthy F-117 had a higher loss rate in that conflict than the F-16. It could only operate when it was protected by a pack of other aircraft.

Shaping provides 90 percent of the stealth of the invisibility cloak of a stealth aircraft with the remaining 10 percent coming from the RAM coating. The operational doctrine of the F-22 is based on the F-22 flying around without its radar on and not making any other electronic emissions either. At the same time it is vacuuming up the electronic emissions of enemy aircraft, triangulating their position and then pouncing at a time of its choosing. The world has moved on from that. Stealth, as practiced by the F-22 and F-35, is optimized on radar in the X band from 7.0 to 11.2 gigahertz. Detection in other parts of the electromagnetic spectrum has improved a lot over the last twenty years. Chief of these is infrared search and track (IRST) which enables an F-35 to be detected from its engine exhaust from over 60 miles away. The latest iteration of the Su-27 Flanker family, the Su-35, has IRST and L band radar on its wings. L band and lower frequency radars can see stealthy aircraft over 100 miles away. So an Su-35 can see a F-35 well before the F-35 can detect it. Stealth, as an end in itself, has outlived its usefulness, and maintaining that RAM coating is killing the budget for no good reason.

Right at the moment the U.S. Air Force is heading for a repeat to the start of World War 2 when its fighters got shot down by far better Axis aircraft. The qualitative edge in the small number of F-22s won’t save the day because they will be overwhelmed by the sheer number of Chinese Flanker variants, as per the RAND study of 2008. There is a solution but it means going overseas to get it. That has been done before. In the 1950s, the U.S. Air Force had the English Electic Canberra bomber built under license in the U.S. as the Martin B-57. It was a great design, illustrated by the fact that one B-57 was resurrected after 40 years in the boneyard in Arizona and used for battlefield communications in Afghanistan. Thirty years after the B-57, the Marine Corps fell in love with another UK aircraft, the Harrier, and had it built in the U.S. from 1985 as the McDonnell Douglas AV-8B.

The first F-35 to come off the assembly line was in 2006. That was ten years ago and, even though the F-35 is still years of from going into full production, it needs a $2.6 billion modernisation to upgrade its combat power. The solution to the F-35 nightmare first flew in 2008.  This is the Gripen E of Saab in Sweden, updated from the original Gripen A of 1988. It is a delta wing with canards, likely the ideal planform for a single-engine air-superiority fighter. The last time the US Air Force had a delta-wing fighter was the Convair F-106 Delta Dart, retired in 1988. A promising effort that might have resulted in another delta-wing fighter was the F-16XL, a stretched version of the F-16 with a far greater range and bomb load. The F-16XL was sacrificed for the program that ultimately became the F-22.

Simulation has the Gripen E shooting down the Su-35 at almost the same rate that the F-22 does. The Gripen E is estimated to be able to shoot down 1.6 Su-35s for every Gripen E lost, the F-22 is slightly better at 2.0 Su-35s shot down per F-22 lost. In turn the Su-35 is better than the F-35, shooting down 2.4 F-35s for each Su-35 shot down. The Su-35 slaughters the F-18 Super Hornet at the rate of eight to one, as per General Hostage’s comment. How that comes about is explained by the following graphic of instantaneous turn rate plotted against sustained turn rate: 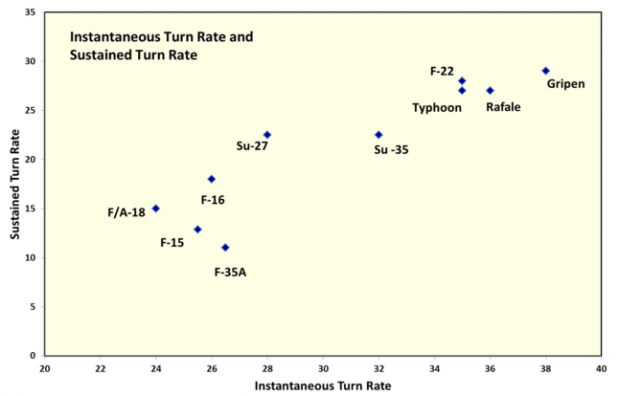 Turning, and carrying a gun, remains as important as it has ever been. Most missiles miss in combat and the fighter aircraft will go on to the merge. Assuming that pilot skill is equal, a 2° per second advantage in sustained turn rate will enable the more agile fighter to dominate the engagement. A high instantaneous turn rate is vital in being able to dodge the air-to-air missiles in the first place. The aircraft on the upper right quadrant of the graph will have a higher survival rate. The ones on the lower left quadrant will produce more widows.

The Gripen E has a U.S.-made engine, the GE F414, which is also the engine of the F-18 Super Hornet. The Swedish Air Force is buying its Gripen Es for $43 million per copy, less than one third of the price of the F-35. Its operating cost per hour is less than a tenth of that of the F-35’s. In fact it is the only aircraft that meets the selection criteria of the Joint Advanced Strike Technology program that spawned the F-35: that the acquisition and operating costs be not more than 80 percent of that of legacy aircraft.

Saab’s partner in the U.S. is Boeing, which will be without a fighter offering of its own once the F-18 Super Hornet production line in St Louis closes. It would be surprising if the two companies haven’t discussed bringing the Gripen to America. That would be good news for U.S. power projection in the Western Pacific, and for the families of U.S. airmen.

The story doesn’t end there. At the moment the Su-35 is the fighter to beat. It is almost as large as the F-22, with an empty weight of 18.4 tonnes and a maximum takeoff weight of 34.5 tonnes. Its fuel fraction of 38 percent gives it a combat range of 1,000 miles. The argument for having a large fighter aircraft is that physics makes larger aircraft more capable. Assuming that a smaller aircraft and a larger aircraft have a very similar lift to drag ratio, cruise at the same Mach number and have the same specific fuel consumption, the larger fighter will have about 40 percent better range. An inevitable consequence of the physics of flight is that long range aerial combat demands larger airframes and two engines, all other parameters being equal.

There is a role for a large, agile, twin-engined fighter aircraft in the Western Pacific. Apart from providing air superiority, such a platform would be ideal for delivering long range anti-ship cruise missiles. But this should not be a resurrected F-22. The F-22 program dates from 1991 when its prototype, the YF-22 produced by Lockheed Martin, won the fly-off competition against the YF-23 produced by Northrop, though the YF-23 was faster and stealthier. The U.S. Air Force awarded the contract to Lockheed Martin because it thought that Northrop would not be up to building the B-2 bomber and the new fighter at the same time. Given that the avionics of the F-22 are now over 25 years old, it would be a better outcome from here, for the long term, to go back to the YF-23 airframe and update its engines and avionics. This would produce an aircraft with a weight, acquisition cost and operating cost similar to that of the F-15. It would be as stealthy as possible from shaping without the expense, logistic footprint and low availability of maintaining a RAM coating. Northrop has been awarded the Long Range Strike Bomber program of 80 aircraft at $550 million each. Northrop’s bomber offering is an enlarged, subsonic YF-23. We also need the updated fighter variant.

David Archibald is the author of Twilight of Abundance (Regnery)