Since joining the Trump campaign as a national spokeswoman in November, Katrina Pierson has served as an attack dog of sorts for Donald Trump, attempting to expose his critics and opponents as faux conservatives who are simply pulling the wool over the eyes of the American people.

And yet, Ms. Pierson’s own statements reveal she is a self-proclaimed devotee of Malcolm X (whom she has referred to as her “idol”) and has a history of attacking conservatives as racists, sneering at Christians who are unable to “handle the truth” and mocking candidates who open up about their faith on the campaign trail as preachers who would be “great if we were electing a Jesus.”

Pierson points to Malcolm X as a large source of her ideological founding, much like the leaders of Black Lives Matter do. Pierson has called the radical figure a hero and is open about her literal idolization of him, explaining that “MLK was too moderate for me.”

Like Al Sharpton, Jesse Jackson, and others on the left, Katrina Pierson used the 2012 trial of George Zimmerman over the death of Trayvon Martin to accuse conservatives of racism, lies, and “bigotry.”

Before all the facts of the case were even out, Pierson helped circulate a petition demanding George Zimmerman’s immediate arrest and encouraged her followers on Twitter to “Stand For Trayvon Martin.” Time and time again, Pierson sided with progressives and declared Martin’s death a murder, even accusing the police of lying to cover up the crime.

The same day that news outlets confirmed Trayvon Martin had been suspended from school for marijuana use, Pierson tweeted: “Congrats! #Conservatives live up to the Left’s expectations” and linked to an article from left-wing blog Think Progress that accused “right-wing bloggers” of trying to lead a “smear campaign” against Martin. The article singled out Matt Drudge as a leader of the alleged smear campaign. Drudge had been accused of publishing fake pictures of Martin in an attempt to smear him — accusations which were shown to be false. (Pierson herself had previously questioned whether Drudge had “lost his credibility.”)

Pierson even argued that “bloggers” should be held accountable for “what happens next” — possibly a reference to the public concern over possible race riots in the absence of a Zimmerman conviction.

Pierson chided conservatives as the “so-called moral party” and accused them of “demonizing a child & participating in smears of the dead, spreading fake pics & bigotry,” later tweeting: “Conservative Bloggers: #Trayvon was suspended from school and had stolen jewelry before so he must have deserved that BULLET IN THE CHEST!” She would go on to accuse “the right” of spreading “propaganda” and “inflaming the base” as part of a moneymaking scheme.

Conservatives aren’t the only demographic that Pierson has consistently singled out to sneer at in public. Christians, too, have found themselves on the receiving end of her derision.

[dcquiz] In 2010, Pierson made the remarkable claim that “There are no such things as Christians. Just people who call themselves Christians.” In 2011, Pierson publicly mocked the Catholic church, tweeting: “Just saw a commercial from Catholic Church stating that Catholic Church was started by Jesus. I bet they believe that too. #sad.”

During the 2012 election, Pierson slammed Christians as the, “First to name call and First to judge.” She later criticized not just Christians but religious believers as a whole, dismissing the majority of “religious types” as unable to “handle the truth.” A month later she criticized “most religious people” as hypocrites who follow a practice of “Do as I say not as I do.” After another month, she complained that it’s “always the Christians that are married or too old to party that tell you how [you] should be living your life. As if they were [saints].”

While Pierson has openly accused Republicans of being racists and Christians of being hypocrites, she has consistently singled out presidential candidate Rick Santorum for special treatment. During the 2012 Republican primary, Pierson claimed that it’s “hard to argue” that the GOP isn’t racist with Rick Santorum featured so prominently, later implying that he didn’t have many “minority endorsements” because he is racist. (It’s not clear why exactly Pierson seems to think that Santorum is a racist.) 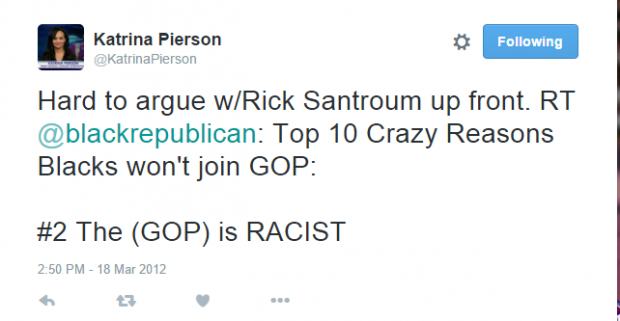 Pierson, who is open about the fact that she voted for Barack Obama in 2008, openly mocked the religious faith of Santorum, whose victory in the 2012 Iowa caucus was due in large part to his strong favorability numbers among evangelicals. Pierson referred to Santorum as “pastor” and his campaign events as worship services and complained about his “preaching,” at one point stating that Santorum would be “great if we were electing a Jesus.”

Despite spending a great amount of time personally attacking conservatives, Pierson has remained the self-appointed arbiter of who is or isn’t conservative. In response to National Review’s “Conservatives Against Trump” issue, Pierson — without a hint of irony — indignantly questioned whether: “‘conservatives’ whom no one ever heard of before 2008 all of the sudden think they own the place?”