An analysis by the Rhodium Group shows green energy tax credits that were extended as part of budget negotiations late last year are a huge boon for wind and solar energy companies. Rhodium predicts wind and solar power will “cut off the surge of [natural gas] generation and become the technology of choice” for complying with the Environmental Protection Agency’s so-called Clean Power Plan (CPP).

“Before the tax extenders utility-scale wind and solar faced a bleak future with combined capacity additions dropping below 5 gigawatts (GW) per year until the CPP kicks into gear in 2022,” Rhodium reported Wednesday.

“The combination of the extenders and the CPP now has the industry positioned for growth well into the next decade with annual capacity additions topping out at an unprecedented 30 GWs in 2021,” analysts added.

Here’s how massive the the “shift” from natural gas to green energy is predicted to be: 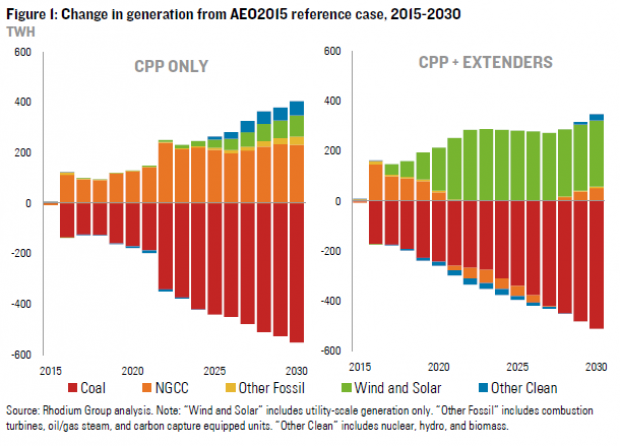 For months, conservative groups have warned extending soon-to-expire green energy subsidies would be a huge win for Obama’s plan to fight global warming. Tax credits for wind and solar have been major drivers behind green energy growth.

In the case of wind power, Congress extended a generous tax credit paying wind turbine operators 2.3 cents per kilowatt hour of electricity produced for the first 10 years of operation. For solar, companies get a tax credit equal to 30 percent of the system’s total cost until 2021.