It’s been a while since somebody who just happens to be a Muslim has decided to kill a bunch of people, despite the fact that Muslims don’t do that. I suppose we were due.

A terrorist-style plot intended to kill dozens of people with automatic weapons at a Masonic center in Milwaukee was foiled this week by FBI agents, federal prosecutors said Tuesday.

Samy Mohamed Hamzeh discussed his plan to attack the center with two others, detailing how they would quickly and quietly kill the first people they saw and then methodically move through the building, “eliminating everyone” they encountered, according to a federal criminal complaint…

“We are Muslims, defending Muslim religion, we are on our own, my dear, we have organized our own group,” Hamzeh said, according to the criminal complaint, adding he was confident it would trigger more attacks in the United States…

Okay, but what’s his motive?

Hamzeh’s original plan was to go to Jordan and kill Israeli soldiers, but that ended up being too much work. So he decided to attack a Masonic center closer to home. I guess Masons are as bad as Jews or something?

Hmmmm, Shriners do wear fezzes as they’re driving around in those little cars… And check out their logo: 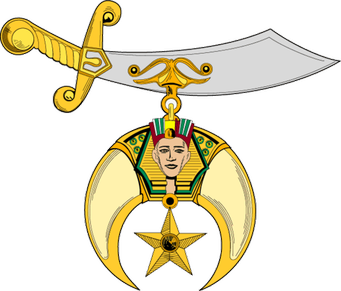 Clearly, Hamzeh is angry about this cultural appropriation.

Besides, isn’t there stuff in the Bible about killing people? Christians kill people all the time. Why doesn’t anybody ever talk about them?

My heart goes out to Milwaukee’s Muslim community in this difficult time. Sorry that the unfortunate string of coincidences that’s giving your beautiful, peaceful religion a bad name has hit so close to home. السلام عليكم‎