In light of the FBI’s apprehension of Ammon Bundy and other militiamen Tuesday, here is a reminder why protesters occupied a remote wildlife refuge.

The occupiers holed up at Malheur National Wildlife Refuge claim they took over the refuge to protest the federal government’s restriction of grazing rights in the Western territories.

The federal government currently controls 28 percent of all land in the U.S., or about 640 million acres, while the Department of Defense controls another 14 million acres of land.

The protests have prompted a handful of Republicans, including Sen. [crscore]Marco Rubio[/crscore], to suggest the government owns too much land.

“I most certainly believe that the federal government controls far too much land in the Western parts of the United States especially,” Rubio told the Des Moines Register’s editorial board earlier this month.“The state of Nevada is an example — it’s almost entirely owned by the federal government. And it goes well beyond the legitimate need of land ownership for defense purposes, for example.”

The Florida senator and presidential candidate said he doesn’t condone the Bundy’s actions, but he does think the federal government should start handing over land to the states.

Below is a graphic showing the amount of land the federal government currently controls. 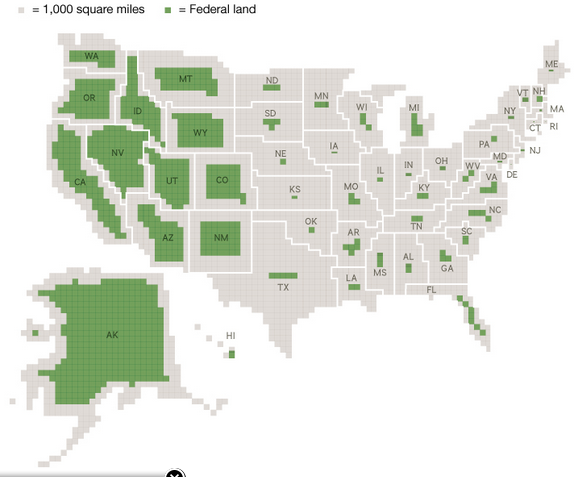 The green shaded area on the map illustrates the amount of land owned by the federal government (Source: Congressional Research Service)