Emails released by the State Department on Friday show that in 2011, then-Massachusetts Sen. John Kerry sent then-Sec. of State Hillary Clinton an email from his iPad that has been deemed to contain information classified as “Secret.”

While previous releases of Clinton’s emails have shown that she and her staff communicated directly with Kerry when he was a senator, the new email is the first from Kerry that the State Department has determined contains sensitive information.

Kerry has largely been silent throughout the Clinton email controversy. He has sent letters asking the State Department’s inspector general to review the agency’s records keeping practices, but he has not publicly criticized Clinton for exclusively using a personal email account and a home-brew email server.

Perhaps now we know why.

In the heavily-redacted email, dated May 19, 2011, Kerry, who then chaired the Senate Foreign Relations Committee, appears to be discussing negotiations between India and Pakistan. Besides Clinton, the email was sent to Tom Donilon, who then served as President Obama’s National Security Advisor. 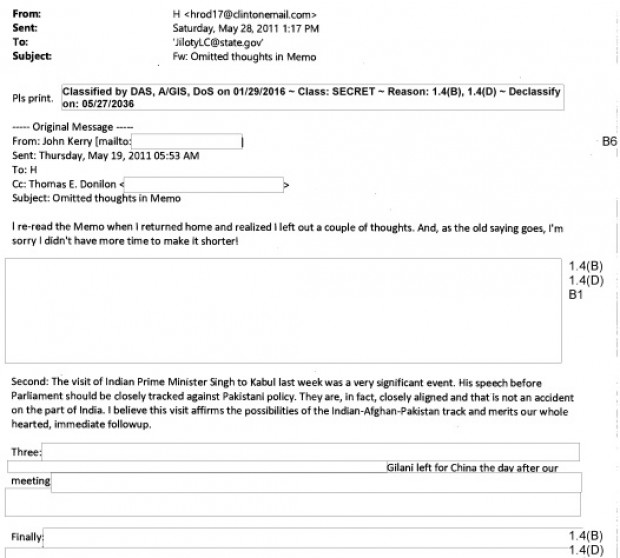 Clinton forwarded the email to an aide, instructing her to “Pls print” the document.

The redactions in the email are listed under the Freedom of Information Act exemptions 1.4(b) and 1.4(d), which are categories reserved for information gleaned from foreign government sources.

The kicker is that Kerry sent Clinton the information from his iPad, a communications device that would have been much more vulnerable to hackers than an encrypted communications system.

According to the Republican National Committee, which flagged the Kerry email in an email to reporters, the batch of Clinton records released on Friday contained 11 emails that the State Department now says contain “Secret” information. That’s more than double the number of emails that contained similarly classified information released in all of the previous releases combined.

According to the RNC’s calculations, 243 emails released Friday were classified at some level, bringing the overall number of classified Clinton emails to 1,583. The State Department also announced Friday that it is withholding in full and into perpetuity 22 emails that contain “Top Secret” information — the highest classification category. (RELATED: State Dept. Withholding 18 Emails Between Hillary, Obama [VIDEO])

The State Department says it is uncertain whether the information in those emails was classified at the time they were originated. The Intelligence Community’s inspector general has said that two separate Clinton emails were contained information that was “Top Secret” when sent. That distinction is crucial because Clinton has maintained that none of the classified emails found on her server were classified when created.

As Clinton’s successor at the State Department, Kerry has overseen the release of the work-related emails that the Democratic presidential candidate handed over in Dec. 2014. But the Democrat and his agency have been criticized by many for appearing to side with Clinton in a battle with the intelligence community over the classification status of many of her emails.

During a press conference in Canada on Friday, Kerry declined to comment on the news that the State Department was acknowledging that 22 of Clinton’s emails contain “Top Secret” information.

“I can’t speak to the specifics of anything with respect to the technicalities, the contents … because that’s not our job,” he said, according to Reuters. “We don’t know about it, it’s in other hands.”

He was not asked about his sensitive communications with Clinton.

Another question Kerry hasn’t answered is why, since he knew that Clinton used a personal email account while at the State Department, he failed to demand that she turn her emails over to the State Department until autumn 2014 after agency lawyers uncovered Clinton’s email address while reviewing documents related to the House Select Committee on Benghazi’s investigation.

It is unclear if Kerry knew about Clinton’s use of a private server, though other high-ranking State Department officials likely did. Emails obtained by The Daily Caller earlier this month show that Patrick Kennedy, the under secretary of management, was on an email chain in which Clinton’s server was being discussed. (RELATED: Emails Show Clinton Aides Resisted State Dept. Suggestion That She Use A State.gov Account)