An analysis of Vermont Sen. Bernie Sanders’ single-payer health-care plan released Wednesday reveals that despite significant tax increases, it would add between $3-$14 trillion to the federal deficit over 10 years, while giving the United States the highest capital gains tax rate in the developed world.

It would also raise the top tax rate to 85 percent, according to the analysis by the bipartisan Committee for a Responsible Federal Budget.

Sanders proposed what he calls a “Medicare for all” plan, which his campaign estimates would cost an additional $1.4 trillion per year. It would be financed by six separate tax increases. The CRFB found, though, that the tax hikes would not be enough to cover the program’s cost, and that it would add $3.1 trillion to the federal deficit over 10 years.

Another analysis by Kenneth Thorpe, chair of health policy and management at Emory University, pegs the deficit at $14 trillion over a decade.

The CBO currently projects that debt will rise to 86 percent of GDP in 2026. Sanders’ campaign estimates his plan would roughly match that. 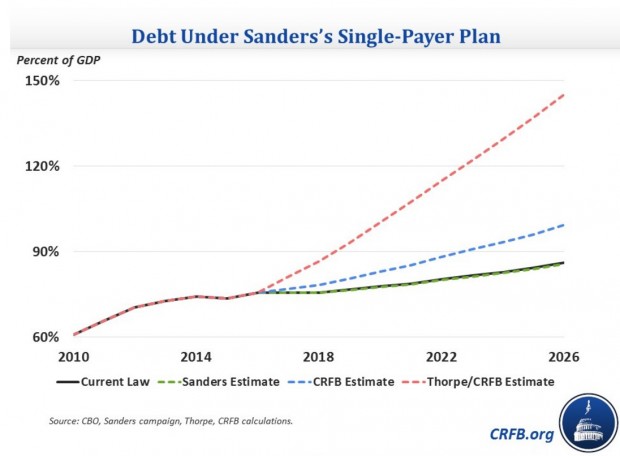 Much of the difference in the CRFB’s estimates compared to Sanders’ is related to tax revenue estimations.

The proposed changes to the tax code by Bernie are: a 2.2 percent increase in all ordinary income tax rates for individuals, a 6.2 percent payroll tax paid for by employers, an increase in income tax rates for high incomes (52 percent being the highest), taxing capital gains and dividends as income, reforming tax expenditure limits (28 percent limit on itemized deductions), and increasing the estate tax.

Across the board, the CRFB finds that the Sanders’ campaign overestimates how much tax revenue these changes would bring.

The campaign estimates that replacing the Alternative Minimum Tax (AMT), personal exemption phaseout (PEP), and Pease limitation with a 28 percent limit on deductions would result in a revenues of $150 billion over 10 years. The CRFB finds that in fact this would lose the federal government $250 billion. Sanders’ campaign believes his proposed employer payroll tax and income surtax would provide $8.4 trillion over 10 years. Though using CBO estimates of what those taxes would bring in revenues, the CRFB found that it would more likely be less than $7 trillion in revenue over a decade.

Many of these changes also would also have negative macro-economic effects that would be difficult to project. For example, Bernie’s plan to tax capital gains and dividends as ordinary income would have a top rate of 62 percent (52 percent from income, 6.2 percent from his Social Security plan, and 3.8 percent from a Medicare investment surtax).

The Joint Committee on Taxation, though, believes that ideal tax rate for capital gains is around 30 percent: any higher and investors avoid capital gains transactions to avoid paying the tax. Under Sanders’ plan, revenue loss from lower capital gains tax collection would most likely outweigh the gains from the higher rate. The CFRB, though, does not include this revenue loss in its estimation. It instead assumes zero additional revenue collection. Likewise, Sanders’ proposed income tax increases would have drastic macro-economic effects.

Including an additional Medicare tax, .2 percent payroll tax, proposed 12.4 percent Social Security tax increase, and state and local taxes, the top income tax rate would be about 85 percent. This is far higher than what most economists view as the revenue-maximizing rate, which is around 60 or 70 percent.

While the CRFB gives Sanders the benefit of the doubt and utilizes his campaign estimations of the health-care plan’s cost, Thorpe does not. Two reasons for the different estimates are based on projections of administrative savings and prescription drug savings.

Currently prescription drug spending is projected to be about $4.9 trillion over the 2017-2026 period, though Sanders’ people believe their plan will have $3.2 trillion in prescription savings over that time. Thorpe wrote in an email to Vox that, “with their savings drug spending nationally would be negative.” Sanders’ campaign subsequently changed its estimations of savings.

Thorpe was hired by the Vermont legislature to devise a single-payer health-care plan, and he uses that plan to point out incorrect estimations from Sanders. Bernie’s campaign believes there would be administrative savings of 16 percent. Based on Thorpe’s estimations for Vermont he thinks it would be much less, 4.7 percent. 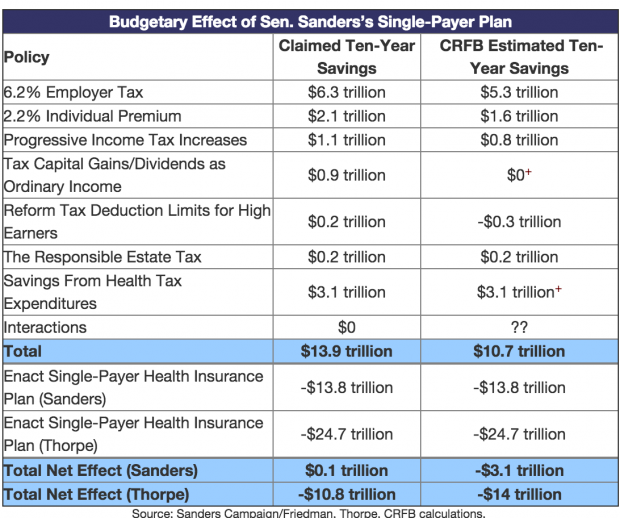