According to one noted scientist and academic, the world’s most belligerent and dictatorial countries on Earth — North Korea — also happens to be the “greenest” nation in the world.

Environmentalists should love the kind of world North Korea has created for itself – crippled industries, a lack of a consistent electrical grid and devotion to fighting global warming make the country a virtual paradise for environmentalists, James Wanliss, a professor of physics at Presbyterian College in Clinton, SC, writes at Townhall.com.

Worse still, Wanliss states, while U.S. and world leaders are preoccupied with fighting man-made global warming, North Korea is busying itself building up a war machine.

North Korean government officials follow “all the policies that Western Greens pine for, and then some. It controls the minute details of life. It has socialized not only medicine but intimacies of life. Science experts decide the most sustainable path for the nation. In short, North Korea is a Green Utopia,” Wanliss notes.

The country’s adherence to environmental issues is not incidental, according to North Korean state-run media. In fact, state officials suggest they are fully on board with fighting man-made global warming.

“It is an important issue related to the existence of humankind to prevent global warming … Yellow dust phenomena, which have been raised as a serious ecological and environmental problem in the international community, are frequent occurrences with a strong intensity owing to the desertification quickened by global warming,” government officials in Pyongyang stated in 2004.

Wanliss goes on to state North Korea appears to be a virtual paradise by environmentalist standards, rebuking things like industry while scrimping and saving energy like a fiend.

“It looks peaceful; there is no movement, little industry, presumably a green paradise. Though perhaps horrified by North Korea’s oppression of its people, environmentalists do admire the darkness, ascribing a quiet dignity to people who consume less,” the physics professor writes. “Their carbon footprint must be extremely low. Almost all the people live a life of downward mobility.”

Wanliss, of course, is referring to recent overpasses by NASA’s Suomi NPP spacecraft revealing North Korea’s blighted electrical grid in a level of detail never seen before. The nighttime images show a bright South Korea in juxtaposition to the darkened, barren North Korea. 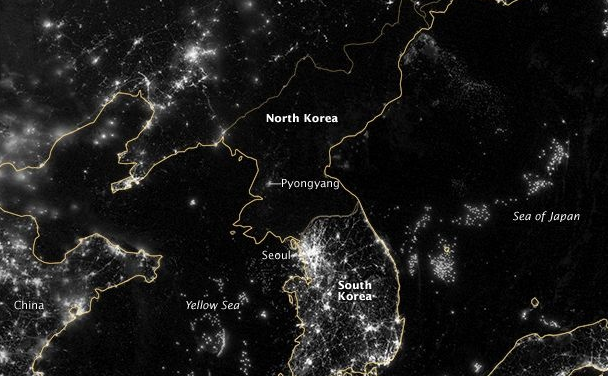 “I get a thoroughly different impression. In North Korea, total darkness. In South Korea, a riot of activity splashed on a canvas, a productive light on a hill,” Wanliss states.

And despite the country’s big talk on the environment, Wanliss notes, North Korea is actually an “environmental nightmare.”

According to ecologist Margaret Palmer, who visited the country in 2013 on a fact finding trip, North Korea is a disaster. It is a barren wasteland teeming with emaciated farmers who use oxen and outdated tilling equipment to tend their fields.

“We went to a national park where we saw maybe one or two birds, but other than that you don’t see any wildlife,” Palmer told reporters.

“The landscape is just basically dead,” adds one of her colleagues, Dutch soil scientist Joris van der Kamp. “It’s a difficult condition to live in, to survive.”

Chol-Hwan describes his plight under capitivity in North Korea in his book, “The Aquariums of Pyongyang.”

“Once in a great while we would have a fish,” Chol-Hwan writes.

“We could only catch these when the guards weren’t around, because fishing was banned at Yodok. The guards—straight faced as ever—said that the rule existed to protect the environment,” he added about why his fellow prisoners were not allowed to fish.

If this is what a “Green Utopia” is then it “must be for the birds,” Wanliss concluded.