The United States surpassed both Saudi Arabia and Russia early last year and is now the world’s largest and fastest-growing producer of oil. 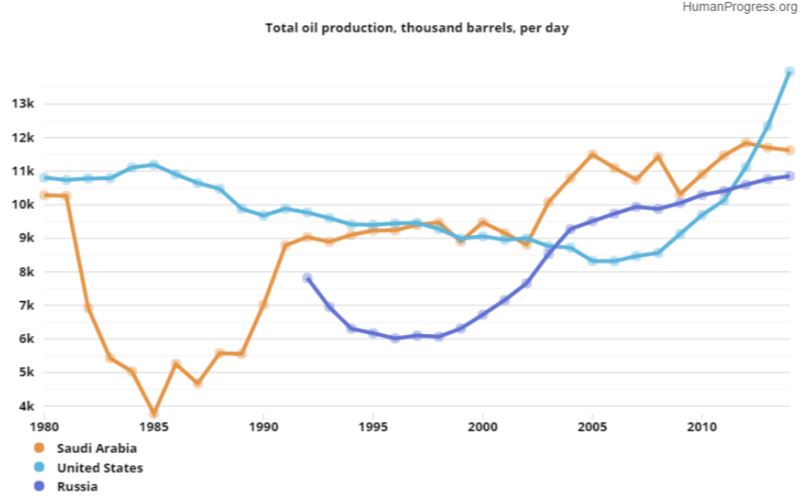 Data compiled by the libertarian Cato Institute’s HumanProgress.org shows American oil production passed the rest of the world’s last year and is on track to keep growing.

U.S. oil production soared due to the increased use of hydraulic fracturing, or fracking, and horizontal drilling. In 2007, America imported about 60 percent of its oil, but by 2014, the U.S. only imported 27 percent of its oil — that’s the lowest level since 1985, according to government data.

America is even exporting crude oil to other countries, including members of the Organization of Petroleum Exporting Countries (OPEC) after repealing a ban on exports in December. Venezuela, a member of OPEC, has been forced by its failing economy to accept its first shipment of American crude oil in early February, despite having some of the world’s largest petroleum reserves.

Exporting oil is expected to boost U.S. gross domestic product (GDP) by $38 billion, reduce the trade deficit by $22 billion and add 300,000 new jobs by 2020, according to another study by ICF International and the American Petroleum Institute. Another study by the Aspen Institute estimates that exporting oil could allow America to remain the world’s largest oil producer while creating up to 1.48 million jobs.