Democratic presidential candidate former Secretary of State Hillary Clinton is viewed as the least honest and trustworthy of all Democratic and Republican candidates, according to the latest YouGov poll.

“Sanders is the clear winner on a quality that matter most to a third of the public – being honest and trustworthy.  In fact, his rating on honesty is the highest of any of the remaining candidates with the public overall, Republican or Democrat.  Clinton and Republican Donald Trump fare the worst,” writes YouGov’s Kathy Frankovic.

“More Republicans describe Sanders as honest and trustworthy than don’t, by a margin of 46 percent to 36 percent.  Republicans give their party’s frontrunner, Donald Trump, similar ratings as they give Sanders on honesty.  Sanders’ Democratic opponent fares much worse on this characteristic overall and with members of each party.  Just seven percent of Republicans and 48 percent of Democrats describe Clinton as honest and trustworthy.”

Though Clinton loses out in the honesty department, she polls significantly better than Sanders when it comes to readiness to be commander in chief and ability to deal wisely with the economy. 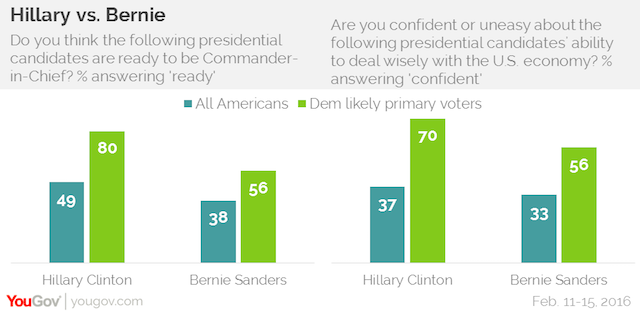