Perhaps lost in the shuffle of staff members who used private email addresses while working at the State Department is Monica R. Hanley, who began working for former Secretary Hillary Clinton as far back as June 2004, when the 2016 Democratic presidential candidate was a New York senator.

According to Legistorm, Hanley was promoted from Staff Assistant to the Special Assistant for Government and Committee Affairs in December 2006, then served as Director of Intergovernmental Affairs from April 2007 to Jan. 21, 2009, when Clinton was sworn in as secretary of state. Hanley then became Clinton’s Transition Personal Office Director.

Chuck Ross reported for The Daily Caller on Jan. 18, 2016 that Hanley was included on a chain of emails that began with the executive secretary of the State Department, who “suggested to Hillary Clinton’s aide, Huma Abedin, in August 2011 that the then-secretary of state begin using a government email account to protect against unexpected outages of her private email server.”

Two other staffers were on the chain: “Patrick Kennedy, the under secretary for management at the State Department” and Clinton’s Counselor and Chief of Staff Cheryl Mills.

“But as the emails show, Abedin pushed back on the suggestion, telling the official, Stephen D. Mull, then the executive secretary of the State Department, that a State-issued Blackberry equipped with a state.gov email address ‘doesn’t make a lot of sense,'” noted Ross, who obtained the emails through a Freedom of Information Act lawsuit filed on TheDC’s behalf by the government watchdog group, Cause of Action.

In an email released on Sept. 30, 2015, Clinton first wrote Hanley at her private email address (monica.hanley) asking her to pick up her iPad from her desk at home and bring it to the plane. Part of that message was redacted by the State Department. When Clinton didn’t get an immediate response on Jan. 8, 2011, she wrote back 45 minutes later, but this time also included Hanley’s official government address, asking, “Did you receive this? (I never know for sure if people do!).”

Five minutes later, responding from HanleyMR@state.gov, Hanley apologized to her boss: “Yup! I did receive it but had not checked my personal account yet. Not a problem. I’ll bring the ipad. Sorry for the delay.” 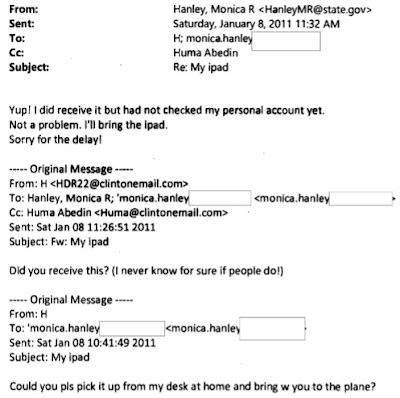 Hanley appears to have received little press attention, even though she worked for Clinton for at least nine years. Until she was noted in articles on the Clinton emails in May 2015, according to Google News, Hanley had only appeared as a signatory in a letter to the editor that was rejected by The New York Times, but published in a March 28, 2008 Huffington Post story by Katharine Zaleski. Searches in the archives of two of the biggest US newspapers, The Washington Post and The New York Times, only turn up one brief mention in a Post article last November.

[dcquiz] According to searches of the emails posted at the State Department website, “hanleymr” returns 1,141 results, beginning on Aug. 21, 2009, while “monica.hanley” produces 309. The private email address was first used on Sept. 28, 2010, when Clinton asked Hanley to please print an email Hillary had forwarded from Ambassador Phil Verveer, the former Deputy Assistant Secretary of State and U.S. Coordinator for International Communications and Information Policy.

On Sept. 18, 2011, Hillary Clinton forwarded an email sent by former Assistant Secretary of State for European and Eurasian Affairs Philip Gordon to Hanley’s personal email address, which was almost completely redacted when the State Department released it on Oct. 30, 2015. It was marked as a classified confidential email, and won’t be declassified until 2036. 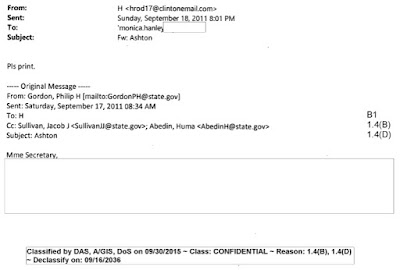 So far, six of the released emails, that included Hanley’s personal email address, have been marked as classified. Five contain major redactions, including one released Saturday regarding a meeting Martin Indyk — who served as the Assistant Secretary of State for Near East Affairs and a U.S. Ambassador for Israel when Bill Clinton was in the White House — held with former Secretary-General of the United Nations Kofi Annan on May 24, 2012 in Geneva, regarding “the attitudes of Syria’s neighbors to the ongoing internal conflict.”

The redacted parts of the email Clinton forwarded to Hanley to print concerned communications with Prime Minister Benjamin Netanhanyu and other Israeli officials that Indyk relayed to Annan, while he was then the UN — Arab League Joint Special Representative for Syria.