The 2016 Republican Presidential Primary has effectively dwindled down to a three man race filled with all kinds of noise that can make it difficult for the American people to know who they can trust.

Having had the opportunity to meet most of the Republican candidates and look them in the eyes, I can tell you that Ted Cruz is the best candidate to uphold the Constitution and put the interests of the American people first.

I first met Ted in 2010 at an American Legislative Exchange Council (ALEC) conference, which is a conference for state legislators that was being held in Washington, DC. He was there to speak on a panel about the Health Care Compact, a project of interstate compacts that would effectively transfer the regulatory authority for health care from the federal government back to the states. My boss at the time was also speaking on the panel, which led to our meeting.

After the panel discussion, a group of us decided to eat breakfast in the hotel lobby. Ted and I ended up sitting down at the table first. We shared a five-minute conversation before the rest of our group joined us and in that time we spoke casually, introducing ourselves and talking about why we were there. This was my first impression of him and he was extremely humble and somewhat soft spoken. It is something that has stuck over the years.

During our chat, he told me he planned on running for the U.S. Senate seat representing the state of Texas. In all honesty, I thought to myself that there’s no way someone this humble and unassuming could ever be a Senator from Texas of all places. But, sure enough he announced his candidacy and fought a huge uphill battle against the political establishment of the state that claimed the most recent former President of the United States. It was a tough fight, but he won when no one thought he could. This proved to me that he was a winner.

Since then, I have had the opportunity to work with Senator Cruz and his staff on important issues. He and Senator Mike Lee led the fight to defund Obamacare, he and Senator Jeff Sessions led the fight to stop Marco Rubio and Chuck Schumer’s amnesty bill, and he led the fight to stop President Obama’s Iran Nuclear Deal. My team at Tea Party Patriots were working alongside Senator Cruz to organize grassroots support for all of those efforts. In all of my interactions with Ted Cruz, he has consistently been the same man of conviction, ready to stand up and lead the way to defend the Constitution and to keep the promises he made to his supporters. In private, he has always been the same humble man that I met in 2010.

Most recently I spent some time with Ted Cruz in Iowa for a campaign event where my boss, Jenny Beth Martin, and Tea Party Patriots Citizens Fund officially endorsed him for president. I wanted to share this backstage image of him prior to going on stage to give his stump speech. To me, this is the Ted Cruz that the public has rarely seen. 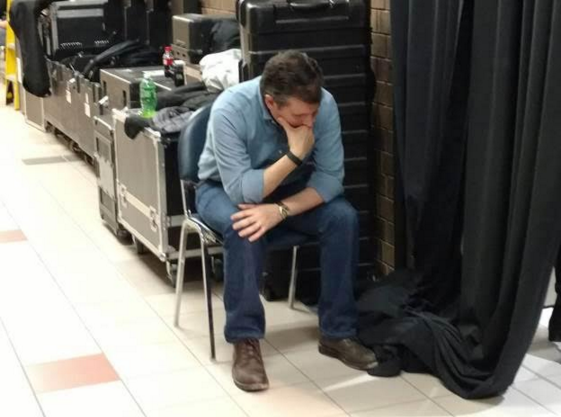 To the general public, he may come across as the “smartest guy in the room” when he’s giving a speech or when he’s in a debate (he usually is), but backstage that night, he was the same humble person I met six years ago before he was a U.S. Senator. When he arrived at the event, he made it a point to speak to everyone backstage. He then found a place to sit down and quietly reflect before going out to give his speech.

That moment of reflection truly personified his humility and with all of the baseless attacks being thrown at his character in recent weeks, I felt obligated to share this candid moment. The American people still have plenty to learn about the most trustworthy and consistent conservative running for president in the 2016 race. I can only hope that they will look to the people who have fought side by side with him over the years rather than to his current political rivals who will apparently say anything they can to stop him from winning the nomination.