Flip flops, trash talk, “home girls,” and “assassin-priests.” That’s a good summation of the most interesting of the 881 Hillary Clinton emails that the State Department released Friday afternoon.

This one is just bizarre. In a Jan. 2010 email, Clinton sought to bolster the spirits of Maryland Sen. [crscore]Barbara Mikulski[/crscore], who was frustrated with the rollout of Obamacare and the stalling economy.

“Keep going,” Clinton wrote to Mikulski, referring to a quote from a speech attributed to the Underground Railroad hero.

“Home girl” is believed to have originated with the Latino community in the 19th century. That term — and derivations like “homeboy” and “homie” — are commonly used by Latino and black youth, and not by 60-plus-year-old white women.

One April 6, 2011 email appears to show Clinton lobbying for a Colombian trade deal that she had pledged to oppose during the 2008 presidential campaign.

In the message, Clinton shared details with several aides about her conversations about the deal with Michigan Rep. Sandy Levin, who was then the chairman of the House Ways and Means Committee.

As the International Business Times notes, Clinton said during the 2008 presidential campaign that she opposed the trade pact because she was “very concerned about the history of violence against trade unionists in Colombia.”

But in her conversation with Levin, Clinton appears to have touted reforms she said had been implemented by Colombian president Juan Manuel Santos. She also insisted that the deal was so good that Colombian workers would end up having “better rights” than some American workers.

“In the ‘couldn’t resist category’, I told him that at the rate we were going, Columbian [sic] workers were going to end up w the same or better rights than workers in Wisconsin and Indiana and, maybe even, Michigan,” she said. 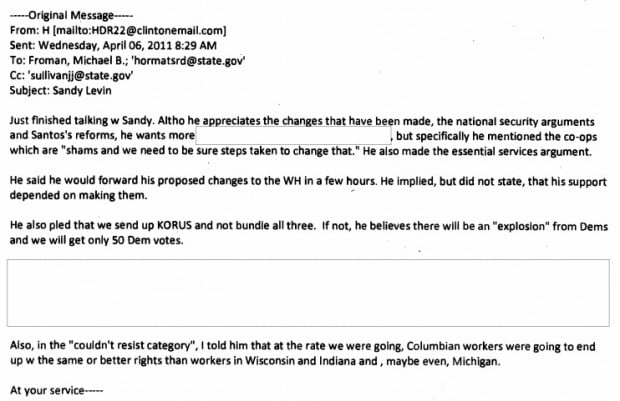 “GREAT line on Columbian [sic] workers!!!!!” he wrote to Clinton.

Despite Clinton’s assurances about the protections in the Colombian trade deal, few reforms appears to have been enacted since it was implemented.

As the International Business Times notes, the AFL-CIO reported last year that in the four years since the deal was enacted, Colombian workers have been the victims of “1,933 threats and acts of violence, including 105 assassinations of union activists and 1,337 death threats.”

“I didn’t even know this agency existed!”

As Phil Kerpen, the executive director of the free market group American Commitment noted on Twitter, one May 2010 Clinton email helps make the case that the federal government is entirely too large.

That’s because Hillary Clinton, who by then had spent 18 years working in and around the federal government, was unaware that an independent federal agency created in 1961 even existed.

In the email, Clinton was provided a history of the U.S. Trade Development Agency, a small, independent federal agency that aims to advance U.S. trade interests.

“I didn’t even know this agency existed!” Clinton exclaimed to her aide, Michael Fuchs.

“See what else you can find out,” Clinton added in the email.

It’s clear from the many releases of Clinton emails that the former secretary of state’s friend, Sidney Blumenthal, was no great fan of the Obama administration. After all, it was Obama’s chief of staff, Rahm Emanuel, who vetoed the idea of Blumenthal working at Clinton’s State Department in the summer of 2009. (RELATED: Did Sid ‘Vicious’ Blumenthal Commission Rahm Emanuel Hit Pieces After State Dept Snub?)

Vicious Sid’s anti-Obama bent is evident in a Nov. 21, 2009 memo that he sent to Clinton which was chock full of gossip about inner turmoil at the White House.

He slammed Emanuel and his “underling,” Denis McDonough, in the memo, calling the latter an “assassin-priest.” He also labeled current CIA director John Brennan, who then served as Obama’s Homeland Security Adviser, a “mole for the Tenet clique.” George Tenet served as CIA director during the Clinton and George W. Bush administrations.

Clinton has defended Obama’s presidency at every turn during the 2016 presidential campaign, but her emails show that she rarely if ever defended Obama when her friends, allies, and aides criticized him or his initiatives.

As The Daily Caller reported on Friday, Blumenthal reported to Clinton that he was told of disparaging remarks that California Rep. Nancy Pelosi made of President Obama during a meeting with wealthy donors in the weeks after Democrats suffered a devastating defeat in the 2010 mid-term elections. (RELATED: Email: Nancy Pelosi Said Dealing With Obama Was Like Dealing With ‘The Junior Senator From Illinois’)

“When I go to the White House I feel like I’m dealing with the junior senator from Illinois,” is what Pelosi allegedly told members of the Democracy Alliance.

1
NBC News Spent Weeks Reporting On A Contributor's Journey Battling Coronavirus – But Now He Says He Never Had It
Media
2
Mueller Defends Investigation Of Roger Stone After Trump Commutes Prison Sentence
Politics
3
'Powerful Enough To Do Whatever We Want': A Journalist's Escape From Socialist Venezuela, Part 1
Opinion
4
Police Reportedly Seize Rifle From St. Louis Couple Who Warded Off Protesters In Viral Video
US
5
Trump Calls For Dossier Author Christopher Steele To Be 'Thrown In Jail'
Politics