The newest batch of Hillary Clinton emails provides more evidence that the former secretary of state did not want government officials to know that she had an intelligence-sharing relationship with Sidney Blumenthal, her longtime friend.

But while previous releases have included at least two emails showing Clinton asking aides to remove information identifying Blumenthal as the sender of intelligence reports, one released by the State Department on Monday shows that she wanted to conceal the evidence from the White House.

“This is informative,” Clinton wrote to her foreign policy adviser, Jake Sullivan, along with a memo from Blumenthal about happenings in Libya.

“Should we pass on (unidentified) to WH +/or other agencies?” she asked. 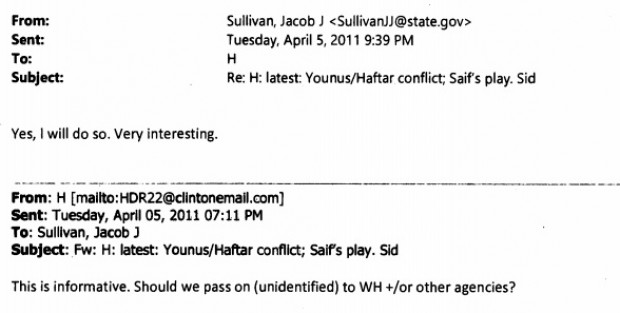 Though Clinton’s email does include her rationale for withholding Blumenthal’s identity from the White House, it most likely stems from the icy relationship between the former journalist and President Obama and his close aides.

In 2009, Obama’s then-chief of staff, Rahm Emanuel, infamously blocked Blumenthal from a job at Clinton’s State Department because of his anti-Obama activities during the 2008 presidential campaign. Blumenthal, a former Bill Clinton White House aide, reportedly spread rumors about Obama to his journalism friends.

Other Clinton emails show the Democratic presidential candidate asking her aides to hide Blumenthal’s identity, but only on printed copies of memos he’d forwarded her way.

“Pls print three copies but remove the heading from Sid so it is just the memo from Joe to me,” she wrote to an aide on Sept. 30, 2010. Blumenthal had forwarded Clinton a letter from their mutual friend, former Amb. Joseph Wilson. (RELATED: Email Shows Hillary Ordering Aide To ‘Remove The Heading’ From Sid Blumenthal Message)

“Can you print for me w/o any identifiers?” she asked her deputy chief of staff, Huma Abedin, of a March 9, 2011 Blumenthal memo about Libya.