The Affordable Care Act hasn’t just caused premiums to skyrocket across the country, out-of-pocket costs are also on the rise.

According to Freedom Partners, an Arlington, Va.-based pro free-market non-profit, 41 states are facing higher deductibles in 2016 – 17 of which saw a double-digit hike.

The organization used weighted-averages of ACA plan deductibles across the country in to conduct their analysis and created a tool – the 2016 Obamacare Deductible Increase Tracker, which is set to unveiled Thursday morning – allowing users to see how their state measures up. 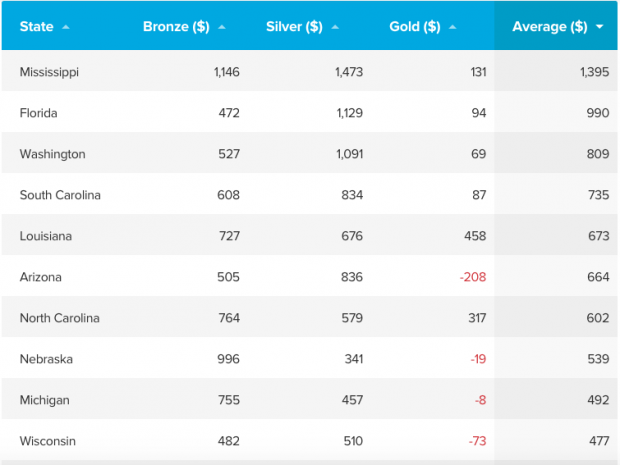 The findings show, on average, deductibles for Bronze, Silver and Gold plans bought through Obamacare exchanges increased by $265 –  an 8.4 percent rise.

“Higher Obamacare deductibles increase, by hundreds of dollars, what families must pay out of pocket to access their health insurance,” Freedom Partners Senior Policy Adviser Nathan Nascimento said in a statement. “Instead of reducing costs, Obamacare regulations and mandates continue to drive up these costs and make quality care less accessible for hardworking families.”

Just five states –Oklahoma, Texas, New Mexico, Illinois and Oregon – and the District of Columbia saw their average deductible go down, but even those regions all saw a rise in costs for Bronze plans.

Freedom Partners released a similar tracker for Obamacare premiums in January, which found all but one state saw an uptick in costs.