It’s finally happened, the more than two-decade “hiatus” in global warming has been broken, rather ironically, by an incredibly strong, naturally-occurring El Niño.

Satellite-derived temperature data — which began in 1979 — shows February 2016 was the warmest on record. A strong El Niño warming event and a warm month in the Arctic drove temperatures 0.83 degrees Celsius over the 30-year average for February, even beating out the highest satellite temperature set in April 1998 during the so-called “El Niño of the century.”

“Yes, February was hot. Just like everyone expected,” Chip Knappenberger, a climate scientist with the libertarian Cato Institute, told The Daily Caller News Foundation. “El Nino, it’s well-known, causes a bigger spike in atmospheric temperatures than in surface temperatures. February’s temperature rise is a perfect example of that.  The temperature’s in 2016 top out higher than the temperatures in 1998, due in part from differences in the nature of the events as well more greenhouse gas emissions in the atmosphere.”

The current El Niño is incredibly strong, and it was likely a major reason the global average surface temperature was the warmest on record in 2015. Satellites, which measure temperatures in the bulk atmosphere, are sensitive to El Niño events, like the super-El Niño that hit in 1998.

“I expect that as this El Nino winds down, the temperature spike in the atmosphere will wane, and if a La Nina follows, temperatures will noticeably drop,” Knappenberger said. 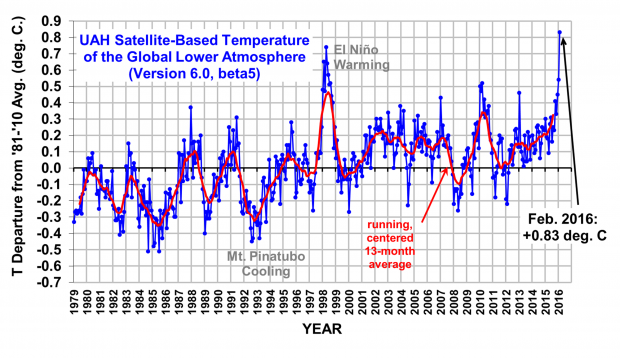 Source: Screenshot of University of Alabama satellite data from DrRoySpencer.com

But El Niño isn’t the only reason temperatures in February reached record levels. University of Alabama climate scientist Dr. John Christy noted, “however, that record might have as much to do with an extraordinarily warm month in the Arctic as it does with warming caused by the El Niño Pacific Ocean warming event.”

“While the Arctic temperature anomaly is large, big temperature swings in the Arctic region aren’t unusual, especially during the winter months,” according to Christy, Alabama’s state climatologist who compiles satellite temperature data with his colleague Dr. Roy Spencer.

For more than 21 years, UAH satellite data has shown no statistically significant global warming, a phenomenon which has been dubbed the “hiatus” in warming.

While February’s temperature spike has ended the 21-year hiatus in global warming, it remains to be seen if it’s only a temporary spike or part of a longer trend. If the Arctic warm spot subsides, the “hiatus” in warming could return.

“Those swings are also normally somewhat transient, so the extra heat represented in February could dissipate over the next few weeks,” Christy noted. “If that happens, it doesn’t appear the heat from the El Niño by itself will be enough to continue pushing temperatures to new records later in the year, in which case this February anomaly might stand out as a singular spike in the dataset rather than part of an ongoing trend.”

While February is smashing records, satellite data showed 2015 was only the third-warmest year on record. Surface temperature readings, on the other hand, claimed last year was the hottest ever recorded.

“February’s warmth, which may bust a ‘pause,’ probably will not mark the beginning of a prolonged rapid temperature rise,” Knappenberger told TheDCNF.