A student at the University of Pittsburgh (Pitt) got his parents targeted for harassment after he had the temerity to tweet about the antics of liberal protesters on campus.

The mess for Pitt senior Doug Steeber started earlier this week when Pitt’s College Republicans invited writer Milo Yiannopoulos to give a lecture on the subject of free speech. The event aroused a storm of controversy, with students complaining it triggered them and made them feel physically unsafe (though there was no violence and the event was observed by local police).

The furor resulted in over 100 students attending a student government meeting Tuesday night, where many denounced the Yiannopoulos speech and demanded new censorship rules that would prevent a similar event from being held in the future.

Steeber was one of the attendees of the meeting, though not as a protester. He told The Daily Caller News Foundation he livetweeted various quotes and observations from the meeting (which was open to the public). Photos of his tweets indicate that his comments were mostly descriptive in nature, with a mild dose of snark. Nobody at the meeting is specifically identified by name. 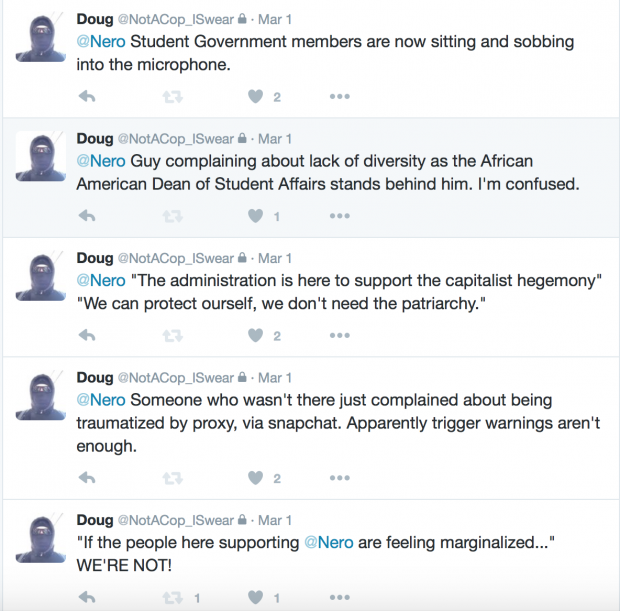 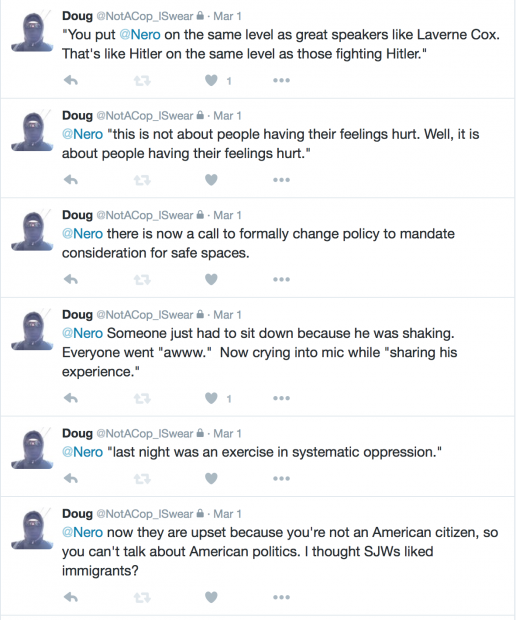 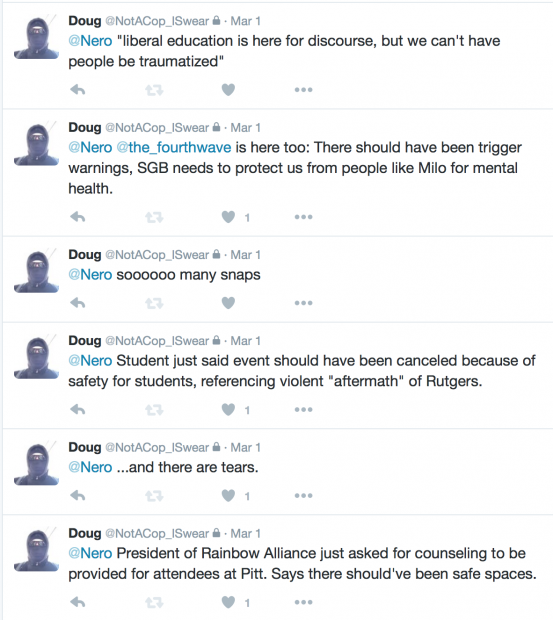 Steeber’s actions may have been pretty straightforward, as far as tweeting goes, but he says it infuriated others at the meeting after one of them saw what he was up to. Some even began to attack him publicly.

“They were screaming at me,” he said. “[One woman’s] friends had to physically restrain her, it looked like.”

But that was only the beginning of Steeber’s problems. Early Thursday morning, he said, he received a notification from Facebook warning somebody appeared to be trying to impersonate him on Facebook. The spoof account had the same name and photo as him. Steeber had the account deleted, but the spoofers proceeded to create another account, avoiding automatic detection by changing his name to “Douglas Steeb” and inverting his profile picture. 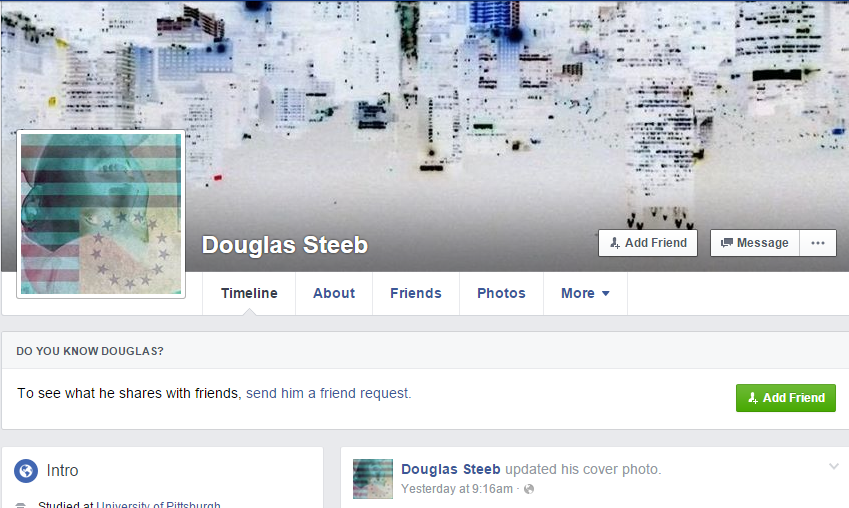 This spoof account, notably, also listed the home address of his parents, which is not listed on Steeber’s regular account.

The most disturbing development came Thursday evening, when Steeber says a friend discovered a flier posted at Pitt. The flier shows a photo of Steeber, denounces him for “making fun of sexual assault survivors,” and gives the name and phone number of his parents with the suggestion that people call them. The flier also warns that its maker (or makers) are hard at work to identify others at the student government meeting so they can be harassed in the same way. So far, Steeber said, his parents have received a few calls from people who immediately hang up, but nothing more menacing thus far. 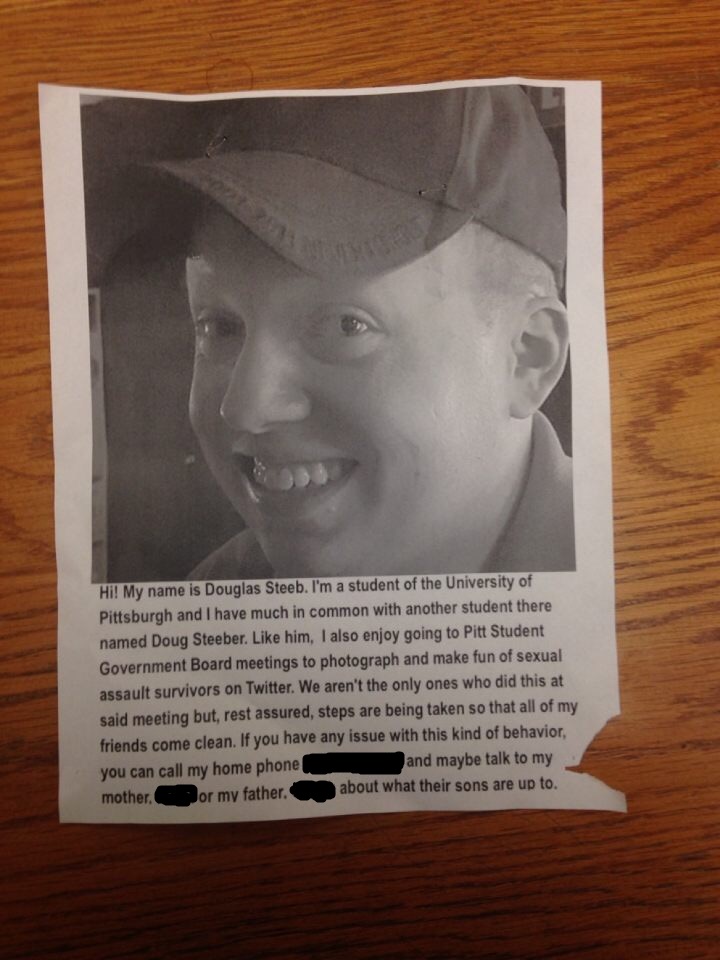 “I have no issue with being challenged on my opinions, but threatening of my family is unacceptable,” Steeber said. He said he had no idea who is responsible for producing the spoof Facebook account or the flier.

At the time of publication, Steeber was attending the Conservative Political Action Conference (CPAC), and was uncertain whether there were any other copies of the flier being distributed around Pitt’s campus.

Steeber’s plight has attracted the interest of the Intercollegiate Studies Institute (ISI), a non-profit that co-sponsored the Yiannopoulos event. ISI President Christopher Long sent a letter to Pitt’s administration on Friday, suggesting that sympathetic statements by school administrators regarding anti-Yiannopoulos activists was encouraging the effort to target Steeber.

“[Vice provost] Kenyon Bonner’s public statements … [are] potentially encouraging the threatening of students associated with the College Republicans and the Intercollegiate Studies Institute,” the letter says. “I hope that you will make a public statement today so that the entire University of Pittsburgh community … is clear about the school’s embrace of free speech, that political harassment will not be tolerated, and in fact that it will be punished according to the University’s stated procedures and policies.”