One of the biggest health risks popularly associated in the public mind with e-cigarettes is the toxic chemical formaldehyde.

Formaldehyde is a carcinogen and has been detected in some e-cigarettes set to certain voltages. Politicians and public health activists have leveraged the fear of formaldehyde exposure to push for greater regulation and taxation of e-cigarettes. The claims on which these fears are based have come under severe criticism in the last year and two new studies are calling into question the zealotry with which e-cigarette opponents grasp at the formaldehyde argument to warn people off vaping.

Here’s how the anti-e-cigarette formaldehyde bandwagon got started and what’s breaking it down.

Media outlets exploded with hyperbolic headlines in Jan. 2015 after a controversial letter published in the New England Journal of Medicine (NEJM). The letter stated the levels of formaldehyde emitted from e-cigs were significantly higher than tobacco cigarettes and could raise the risk of lifetime cancer 5-15 fold. Headlines such as “Some e-cigarettes may release more of a cancer-causing chemical than regular tobacco, study suggests” and “Before You Vape: High Levels of Formaldehyde Hidden in E-Cigs.”

Anti-e-cigarette politicians to this day still invoke the risks of formaldehyde exposure cited in the NEJM to impose draconian taxes and regulation on e-cigarettes. “Vapers will have lung cancer and a whole lot of other things because they’re puffing formaldehyde,” Utah’s Rep. Paul Ray of Clearfield told The Daily Caller News Foundation.

“Formaldehyde is five to 15 times more likely to cause cancer than a cigarette. In five to 10 years from now, you guys are gonna be turning around trying to sue these companies because of the health issues.” Ray was pushing for an 86 percent tax increase on e-cigarettes but his bill was kicked into the long grass on March. 3. (RELATED: Victory For Vapers As 86 Percent E-Cigarette Tax Goes Up In Smoke)

The intense media coverage given to the NEJM letter elicited a strong response from pro-vaping groups, medical professionals, and e-cigarette researchers.

“When the vapor device in the study was used at the realistic setting of 3.3 volts, formaldehyde was not detected. When the researchers increased the voltage to five volts and continued to have their machine take puffs for three-to-four seconds, this caused extreme overheating and the production of formaldehyde.  This is known in vapor product science as the ‘dry puff phenomenon,'” said Gregory Conley, President of the American Vaping Association, on Jan. 21 2015.

“Contrary to the authors’ mistaken belief, these are not settings that real life vapers actually use, as the resulting dry puffs are very unpleasant. In the real world, vapers avoid dry puffs by lowering the length of their puff as they increase voltage,” he added.

The conclusions of the research were deemed so misleading that former Director of  the anti-tobacco group Action on Smoking Clive Bates and cardiologist Dr. Konstantinos Farsalinos both wrote a letter asking the NEJM to retract the letter:

There is a clear risk that extensive and alarming reporting will have persuaded many smokers that there is little to be gained by switching to e-cigarettes, despite the emerging expert consensus that vaping is likely to be at least 20 times lower risk than smoking.

We have documented the flaws in the experiment and cancer risk calculations and in the authors’ reply to criticisms of their work, and written to the editor of NEJM requesting the retraction of the letter.

After this initial retraction request, which was rejected by the NEJM, another letter was sent to the NEJM’s editor asking him to reexamine the case made by Bates and Farsalinos. The letter was signed by 40 academics and experts.

The case against e-cigarettes on the grounds of formaldehyde exposure has become even more dubious in light if two new studies published in 2016.

The first published in Regulatory Toxicology and Pharmacology, shows levels of the carcinogen formaldehyde emitted from e-cigarettes are significantly lower than levels found in regular cigarettes. Researchers agree with earlier findings from Farsalinos, that e-cigarettes need to be turned to such a high voltage to produce anything close to hazardous levels of formaldehyde that it’s wildly unrealistic that vapers are in any significant danger from the chemical.

Researchers agree with earlier findings from Farsalinos, that e-cigarettes need to be turned to such a high voltage to produce anything close to hazardous levels of formaldehyde that it’s wildly unrealistic that vapers are in any significant danger from the chemical. (RELATED: Study Vaporizes One Of The Biggest Health Claims Against E-Cigarettes)

“It burns the nose. It burns the throat. It’s very, very unpleasant. No vaper is going to just sit there and inhale that. It kind of forces the vaper to just shut it off entirely,” Kurt Kistler, a chemistry professor at Pennsylvania State University and co-author of the study.

The second study, released March 3, tested three different types of e-cigarette and found levels of formaldehyde were well below those considered safe by the World Health Organization (WHO). 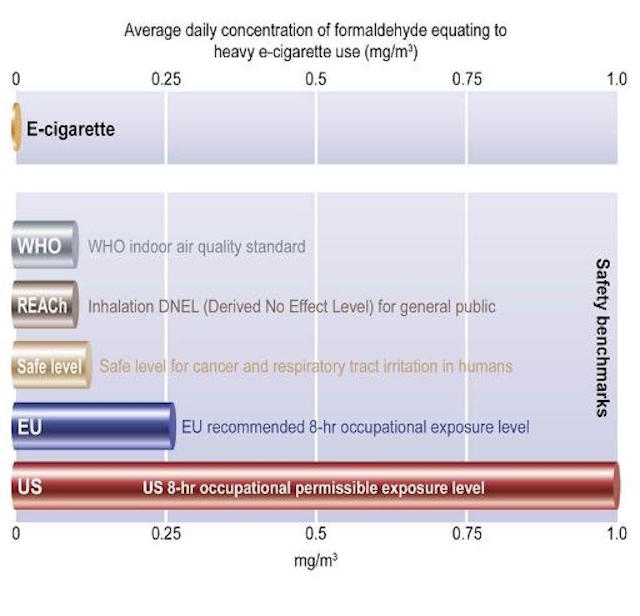 According to Dr. Sandra Costigan, Principal Toxicologist for e-cigarettes at British American Tobacco, who worked on the study, “we believe e-cigarettes hold great potential for reducing tobacco-related disease. For this reason, we continue to strive to better define and further reduce any residual risks that there may be, to as low a level as possible.

“The results from this study show that even heavy use of these products still only results in daily formaldehyde exposure that is less than one-sixth of the exposure from breathing indoor air that complies with WHO air quality standards,” she said.