WICHITA, Kan. — A member of the infamous anti-gay Westboro Baptist Church who was protesting outside of the GOP caucus sight here Saturday morning says she’s not sure who she will support for president but that she won’t be backing Donald Trump.

“He’s sort of fringe,” Lee Ann Phelps told The Daily Caller of the Republican front-runner during a small protest outside of the caucus site in downtown Wichita.

A registered Democrat, Phelps, whose husband Timothy is the youngest son of late Westboro Baptist founder Fred Phelps Sr., said that she doesn’t consider Trump too “fringe” on gay rights issues. The real estate billionaire now opposes legalizing gay marriage at the federal level but does not make the issue a priority on the campaign trail. Instead, Phelps suggested — without much elaboration — that Trump is too far out on other topics.

That’s an ironic position for a member of the Westboro clan, which became notorious in the 2000s for protesting the funerals of fallen American soldiers with anti-gay signs. The group, which has become less active since Fred Phelps died in 2014, claims that America and other Western nations are being punished for accepting the gay lifestyle.

Phelps herself was carrying a sign reading “Wicked Leaders Are A Curse From God.” She leaned on another bearing the image of a fetus read “Shame.”

Phelps’ young son stood by her side carrying a sign reading “America Is Doomed.”

Another man in the four-person entourage held a “God H8s Fags” sign. 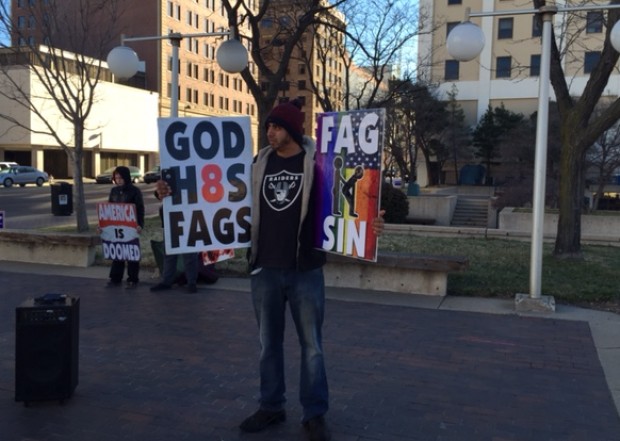 Asked if he was voting Saturday or supporting a candidate, he said he was not. “This is not our world,” he told TheDC.

Phelps is also not voting Saturday. Asked if she planned to support former Sec. of State Hillary Clinton or Vermont Sen. Bernie Sanders come November, she did not express interest in either candidate but also did not rule out voting for either one.