Taxpayers are on the hook for one of the biggest government failures they’ve probably never heard of — $1 trillion in unfunded pension liabilities for federal retirees.

Massive unfunded pension liabilities at the local and state levels have made headlines in recent years, but rarely mentioned is the estimated $1 trillion funding gap in the world’s fourth-largest retirement system. Despite a law passed more than three decades ago requiring officials set aside sufficient funds to cover present and projected future benefits, federal personnel officials are partially subsidizing payments with transfers from the Department of Treasury instead of forcing agencies to come up with the cash on their own, according to a former U.S. Army auditor who has studied the issue closely.

“I’m looking at the taxpayers,” Tom McKinney, a retired certified internal auditor for the U.S. Army Audit Agency who writes about unfunded federal pensions for Truth in Accounting, told The Daily Caller News Foundation. “The taxpayers are being hosed.” Truth in Accounting is a non-profit group advocating greater transparency and accuracy in government accounting. 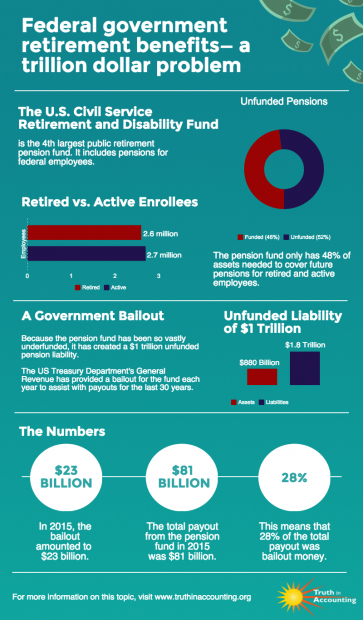 Promised benefits from the Civil Service Retirement and Disability Fund, which has 2.6 million retirees and 2.7 million current federal employees, are only 48 percent funded. If it was a private sector system, retirement leaders would be legally required to have a rehabilitation strategy when it dropped below “critical” funding levels of 65 percent, McKinney said. But in an illustration of bureaucratic “hypocrisy,” no such requirement is applied to the federal government, he said.

For years, the Office of Personnel Management (OPM) has been taking tax dollars from the U.S. Treasury to fund a growing gap in retirement payments, according to information McKinney received through a Freedom of Information Act request. The OPM funded $23 billion, or 28 percent of all payments in fiscal year 2015, in that manner.

OPM isn’t managing the $800 million currently in its retirement fund well either, McKinney said. OPM paid $430 million in retirement benefits to dead people from 2011 to 2014, according to an October 2015 report from the OPM Office of Inspector General.

The Government Accountability Office has tried to draw attention to the problem since 1997, but McKinney said the Treasury’s annual bailouts only incentivize the federal government to keep the pension system underfunded to continue receiving rescue money.

When McKinney first started investigating federal pension plan funding several years ago, fellow retired federal employees told him not to rock the boat, fearing for their own pensions. About 600 retired members of Congress receive retirement benefits from the fund, too.

“Taxpayers are paying for all this,” McKinney added. “And is it moral to have the working folks out here pay for pensions?”