Sixty-one million immigrants and their children now live in the United States, a new analysis of 2015 census data finds, blowing away historical norms for immigrant populations in both number and proportion.

The immigrant population has been growing six times as fast as the U.S. population, so that almost 1 in 5 U.S. residents is now an immigrant or the child of an immigrant, according to the Center for Immigration Studies analysis. The record total includes 15.7 million illegal immigrants and their U.S.-born children.

As recently as 1970, only 13.5 million immigrants and their children lived in the U.S., making up a relatively modest share of the population at just one immigrant in every 15 U.S. residents. The below chart from CIS illustrates the dramatic increase in the immigrant population since 1970. (RELATED: 1965 Immigration Law Exploded Foreign-Born Population, Pew Finds) 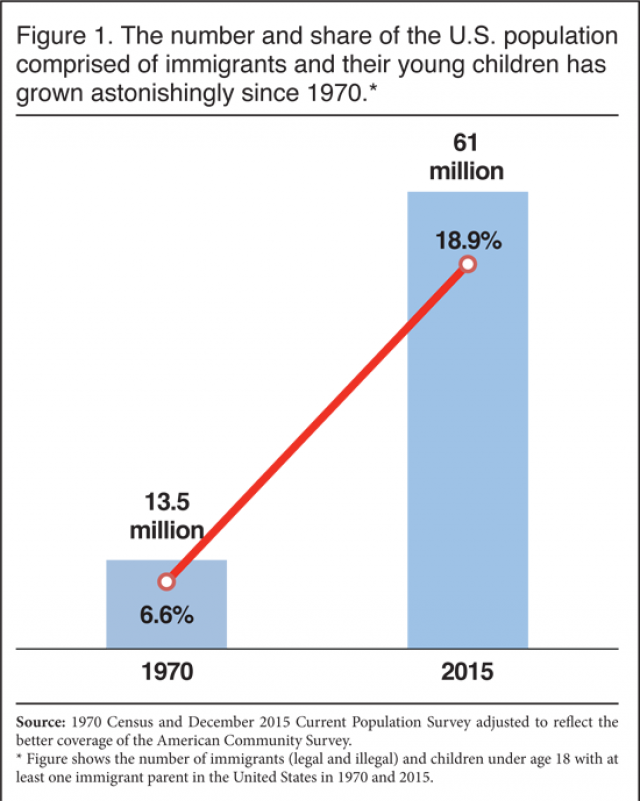 “What number of immigrants can be assimilated?” the study’s author and director of research at CIS, Steven Camarota, wrote in the report. “What is the absorption capacity of our nation’s schools, health care system, infrastructure, and, perhaps most importantly, its labor market?”

The Census Bureau recently projected the foreign-born population (not including U.S.-born children of immigrants) will exceed 51 million — the largest share of total population ever recorded in American history. Immigrants will account for 82 percent of population growth in the U.S. from 2010 through 2060.

The U.S. is on track to issue 10 million green cards over the next decade — a massive new permanent resident bloc larger than the combined populations of Iowa, New Hampshire and South Carolina. Green cards guarantee immigrants a lifetime work authorization, access to federal welfare, Social Security and Medicare, the ability to obtain citizenship and voting privileges and the immigration of their close relatives.