In a recent email exchange, a representative for PETA told The Daily Caller News Foundation that asking about the organization’s alleged practice of euthanizing puppies is just like asking “How often do you beat your wife?”

TheDCNF queried PETA in response to a conversation with a former PETA employee, who told TheDCNF the organization kills “healthy, adoptable animals,” and recounted putting down a litter of puppies. The former employee, who parted ways with PETA after a legal spat, asked to remain anonymous for fear of retaliation.

“I remember once I was euthanizing a litter of puppies with one of my bosses,” the former employee told TheDCNF. “And it bothered me so much, because they had no chance. They were young and totally adoptable, healthy.”

Employee: “The puppies are the hardest for me.”

Supervisor: “Why? I think they’re the easiest.”

Employee: “How? After they’ve never had a chance to have a good life?”

Supervisor: “Well, they’ve never had a chance to suffer either, that’s how I look at it.”

“So there’s a little uh, you know, head scratching at times,” the former employee told TheDCNF, after recounting the exchange.

PETA declined to respond to the allegations, referring instead to the wife-beating analogy. “Why does PETA rationalize euthanizing healthy, adoptable animals, particularly puppies?” TheDCNF asked, along with a few other questions. PETA also refused to verify if the following images, provided to the DCNF, were indeed from inside a euthanization facility.

PETA did respond to the question about euthanizing puppies:

“It’s clear from your deliberately false and misleading questions that no matter how we answer, we’re not going to be given a fair shake. These questions are like, ‘How often do you beat your wife?’ Whatever your source, it is wrong. Thus, this is the only response you will receive from us.”

The former employee provided images of what she said was an animal kill house in PETA’s headquarters. TheDCNF reached out to PETA seeking confirmation, and received no reply.

Peta Kills Animals, a project from the Center for Consumer Freedom (CCF), has been reporting on PETA’s euthanizing practices for a decade. The group’s goal is to “make sure Americans understand how radical PETA is,” its director of research, Will Coggin, told TheDCNF.

PETA kills most of the animals in their custody within 24 hours, according to a 2010 inspection conducted by the state of Virginia that was made public by PETA Kills Animals through freedom of information laws. And the inspector concluded the facility does not meet the statutory definition of an animal shelter, because the primary purpose “is not to find permanent adoptive homes for animals.”

That same year, PETA reported euthanizing nearly 94 percent of the 2,200 animals it took into custody in Virginia, which requires shelters to report how many animals are euthanized each year.

The former employee also alleged PETA stores the dogs it euthanizes in a freezer at the shelter, where it also stores the tofu turkeys it sends to high-dollar donors as gifts each year. PETA recently criticized a New Jersey Pet Shot for storing dead dogs in a freezer. 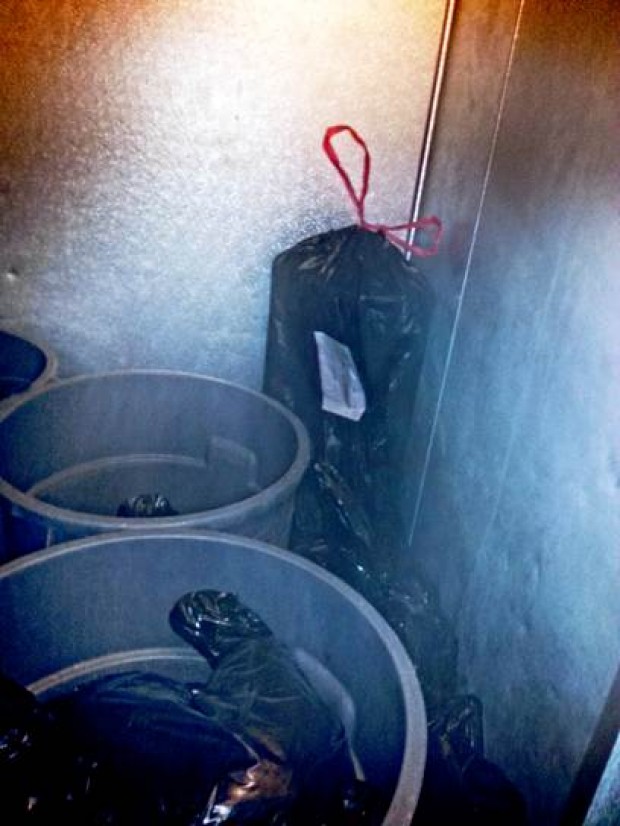 “PETA isn’t in a position to talk about dead pets in a freezer,” Coggin told the DCNF. 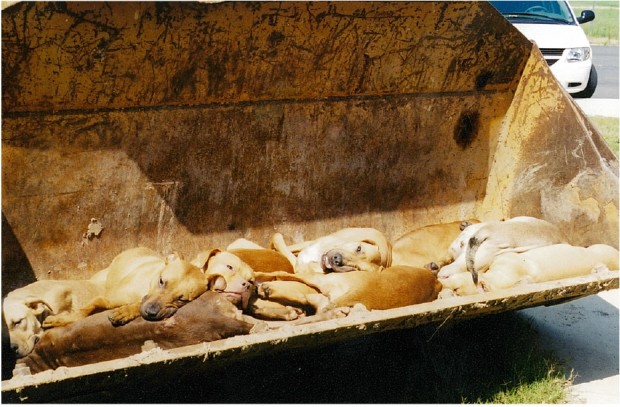 Photo purporting to show Pitbulls euthanized by PETA on their way to a dump. (Former PETA employee)

“They brainwash you basically to see their side or be on their side,” the former employee said. “People that go against those beliefs don’t last there very long.”

Working conditions at the headquarters in Norfolk, VA, are allegedly militant. Everything has to be vegan in the building, the former employee told TheDCNF, recounting being written up for having a Twix bar in a company vehicle, because it contained milk.

The employee was fired after a legal battle involving PETA, and requested further details kept undisclosed to protect the source’s identity.

Pressed further about the allegations, PETA sent TheDCNF a link to this video: