I’m trying to remain objective about the following story, despite my complete disdain for Donald Trump and the fact that I know and like two of the people involved. One of them works at the Daily Caller, and the other one used to. I consider them both friends, and I believe them.

On Tuesday night, right after Donald Trump got done proving he’s not a con man by showing off a bunch of wares produced by businesses he doesn’t own, Jamie Weinstein tweeted this:

Hadas Gold at Politico followed up on it:

Fields was attempting to ask Trump a question as he exited the press conference. Secret Service was starting to clear a path, when Fields was forcibly grabbed on her arm by Lewandowski, moving her out of the way and nearly bringing her down to the ground…

Fields was clearly roughed up by the move, the witness said.

Here’s the response from Fields’ employers at Breitbart:

“It’s obviously unacceptable that someone crossed a line and made physical contact with our reporter. What Michelle has told us directly is that someone ‘grabbed her arm’ and while she did not see who it was, Ben Terris of the Washington Post told her that it was Corey Lewandowski. If that’s the case, Corey owes Michelle an immediate apology.” – Larry Solov, Breitbart News CEO and President

So far there’s been no official confirmation or denial that it was Lewandowski, and it’s too late for any apology to be considered immediate.

Ask yourself: If you told your employer that this had happened to you, is this the response you’d want to see? “Someone” allegedly did it. Okay, it’s a press scrum, things get hectic. I get that. But she was told it was Lewandowski by someone who was standing right there. Response: “If that’s the case.” Why wouldn’t it be the case? Are they saying their own employee made it up?

And what are they going to do if Lewandowski doesn’t apologize?

Now we have another piece of the puzzle. Lloyd Grove, Daily Beast:

The statement was issued in the wee hours of Wednesday morning but remains Breitbart’s official comment on the matter, hours after sources said Lewandowski acknowledged to Breitbart’s Washington political editor, Matthew Boyle, that he did manhandle Fields.

Lewandowski’s explanation to Boyle, said these sources, was that he and Fields had never met before and that he didn’t recognize her as a Breitbart reporter, instead mistaking her for an adversarial member of the mainstream media.

“I only assaulted her because I didn’t realize she worked for Breitbart” is not a good answer.

Okay, this is according to anonymous sources, so take that with as big a grain of salt as you want. But now Boyle isn’t talking. Nobody else at Breitbart is talking. Nobody in the Trump campaign is talking. Do any of them seem like the type to keep quiet about a story that reflects badly on them?

I didn’t have the privilege of meeting Breitbart PR flack Kurt Bardella during his brief stay at the Daily Caller, but according to Grove, he sounds like a real treat:

Fields soon received an aggrieved phone call from Bardella, telling her that Weinstein’s tweets were “juvenile,” and “immature,” according to sources, and advising her “to get your boyfriend under control.”

If it sounds to you like the Breitbart boys are more worried about staying on Trump’s good side than the well-being of their own employee, you’re not alone. Here’s some of the immediate reaction from media figures on the right, some of them past and current Breitbart employees:

Trump henchman allegedly manhandled a female reporter, who works for fox. will that come up?

Since when is it okay for campaign managers to assault journalists? What the hell is wrong with these people?

By the way, "we didn't know she was Breitbart" is an insane excuse. So you now get to assault journalists from other outlets? What the hell?

Oh, he thought she was a mainstream reporter, totally reasonable to assault her in that case https://t.co/ZBm3GPtkLZ pic.twitter.com/ispedgH0FE

So @CLewandowski_ acknowledged that he behaved like a thug? Fields should sue. Trumpbart are cowards. https://t.co/ntCcfvZyAV

What's litmus test for jerking ppl to the ground, @CLewandowski_ ? If you didn't know they were from a site in the tank for you then NOT OK?

This is absolutely enraging. Read every word of it. https://t.co/HPoLTm9xzw

I stand with @michellefields and if the First Amendment means anything to you, you should too. Sadly, many promoting Trump in media won't.

Andrew Breitbart might or might not have liked Trump. Either way, he would have gone to war for Fields. https://t.co/hQFmrSt1UL

Just two weeks ago, Ted Cruz fired his comms director for retweeting something. Now a Trump aide is accused of assaulting a woman in public because he didn’t realize she worked for Breitbart. And it sure seems like they all just want it to go away.

Trump needs to address this right now, because it’s not going away. Maybe the guys in charge at Breitbart don’t care what happens to Michelle Fields, but a lot of other people do, and we’re not going to shut up about it.

Either confirm or deny that Lewandowski did this, Mister Trump. If he did, you must fire him immediately.

Update: Michelle Fields responds. I’m trying to make sense of it. She confirms the story, but then asks everybody to move on. It’s very strange.

Update: Rick Wilson is a GOP consultant who has publicly criticized Donald Trump and felt the wrath of Breitbart for it.

1/ Interesting. When I called Breitbat "Trump's Pravda" they wrote story after story slamming me, attacked me on their little radio show…

2/ …tried to get my clients to fire me, set their minions loose, joked about rape threats their readers made to my daughter…

3/ The little claque running it are loathsome, to be sure. But their definitional principle of massive retaliation against any …

4/ …person who confronts them goes right out the window when Lord Trump is involved. They're unable to understand why a vicious moment

5/ in which Trump's most senior advisor attacks, man handles, and bruises a reporter imposes a moral obligation on their organization.

6/ Their conditional, almost fawning response was a tug of the forelock, practically apologizing for offending Trump.

7/ What would Breitbart do if Rubio campaign manager Terry Sullivan had attacked @MichelleFields? Days of endless, incandescent coverage.

10/ But if I were in here shoes, I'd run like hell from the sick culture Bannon has built in his pursuit of being Trump's most…

13/ …then you're not doing journalism. You're stenographers.

Sorry for the typos in that little rant. It's so cold in this hotel room you could hang meat in it.

Update: We now have a denial. And the real victim.

Michelle Fields is an attention seeker who once claimed Allen West groped her but later went silent. https://t.co/J86Ej42eYx

And yes, he is speaking as a representative of the Trump campaign: 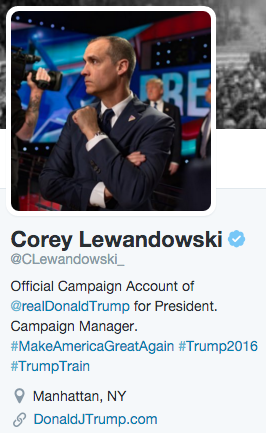 Meanwhile, the usually prolific Trump — who uses Twitter and free cable-news airtime in lieu of a bunch of campaign ads, which he can barely afford because he doesn’t really have any money — hasn’t tweeted since 6 last night:

I guess these just magically appeared on me @CLewandowski_ @realDonaldTrump. So weird. pic.twitter.com/oD8c4D7tw3

I’m being told that she shouldn’t complain because the bruises are so small. No, the bruises should not exist. And now this creep is calling her a liar.