Kansas City’s mayor is urging protesters who plan to attend a Donald Trump campaign rally in the city on Saturday to remain peaceful.

Sly James, a Democrat, made the plea hours after the GOP front-runner canceled an event held at the University of Illinois, Chicago Friday night.

Hundreds of protesters were able to get into that rally, which was the most chaotic Trump campaign event to date. Fights broke between protesters and Trump supporters at the venue. (RELATED: Trump Cancels Chicago Event Amid Chaos, Safety Concerns)

Progressive Youth Organization (PYO), a local radical Marxist group, set up a “Trump Out of KC!” page on Facebook to organize protesters. As of this writing, 525 people say they plan to attend.

“If you think this clown’s positions on Muslims, Mexicans, women, workers and others is deplorable, then make it known and join us this Saturday!” the event page reads.

“There is a threat risk here so please be aware and take the necessary precautions,” it continues. “We plan for a counter-demonstration outside the venue, as well as doing what we can to crash the fascist-fest on the inside.”

PYO’s page shows a strong pro-Soviet, anti-police bent. In one picture posted on its page, a member of the group is seen holding an anti-cop sign that reads “Today’s Pig, Tomorrow’s Bacon.” 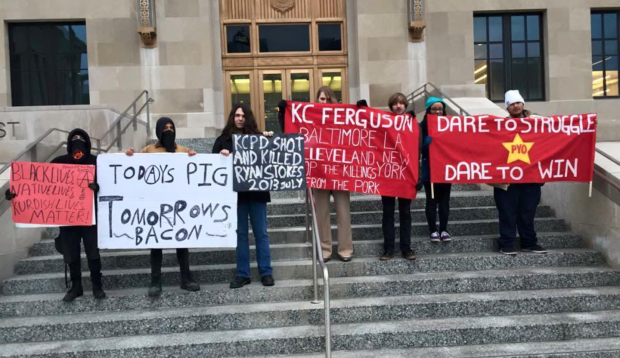