The picture of a woman giving the Nazi “heil” salute in the aftermath of the cancelled rally for Donald Trump in Chicago has been blowing up on social media.

A Trump supporter does the Nazi salute with the right hand, and a cigarette in the left https://t.co/K19xcGj0h7pic.twitter.com/8PYUDVzQMp

But who is this woman?

The “Trump Nazi” is Portia Boulger, who runs the Women for Bernie Sanders Twitter account. It’s another media plant. pic.twitter.com/m1CkwWgwud

Donald Trump Jr. even retweeted it, saying the media would never report this. 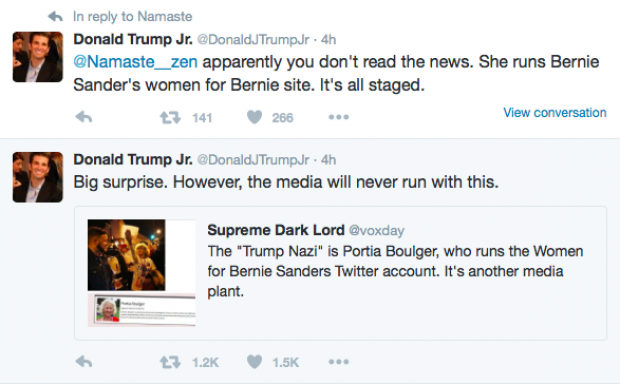 (UPDATE: Donald Trump Jr. appears to have deleted these tweets from his account.)

But the real Portia Boulger reports she was, in fact, not in Chicago at the time of the event, and has a different hairstyle now. Writing on her Facebook page, Boulger said: 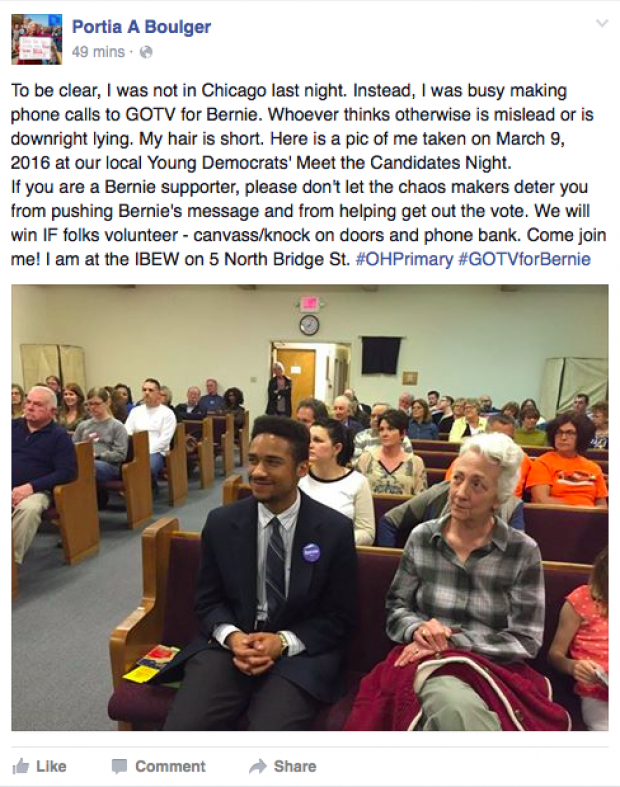 If libel laws were “opened up,” imagine how little protection you would have for repeating this false statement. https://t.co/AMXFmxw2j7

I wasn’t in Chicago last pm spreading some nasty. My hair is short. Come on 2 IBEW in Chillcothe & #GOTVforBernie pic.twitter.com/igtJNC7ITj

The Chicago Tribune reports the woman is Birgitt Peterson, a Trump supporter.

So what led to the salute in the picture?

The man to the left of the woman in the picture is Michael Joseph Garza. According to Garza himself:

@KnowlesAdkisson @ejwamb I am the man on the left, and she openly Hailed Hitler. And held the stance gladly.

So here’s my story about this picture, and I promise you it’s the god honest truth :

my friend Sean Kavanagh and I are walking out of the UIC Pavilion filled with some of the most palpable joy I’ve ever experienced. We did it. We fought for the truth and for a moment, a brief day, WON.

As we are leaving Trump protestors form small sections, small channels where Trump supporters can pass through to exit (a kindness which isn’t quite afforded in the inverse when ya know, people get sucker punched being forced out of Trump rallies).

As people are walking out we’re saying things like “Bye racists”, “You lost. Please just go home now.” bc many are leaving with shoves and shoulder checks, begrudgingly, but most with pent up fury.

The woman pictured with me and what looks to be her husband we’re stragglers in the pack, and started responding to people’s jeers. Some guy ripped a sign out of the man’s hands and another man leapt out of nowhere, encouraging everyone around to respect them and let them leave (again, sometimes America is amazing).

This woman is a human being and although I don’t share her views, I start yelling “I will respect my elders. Please. Leave.” and a few other great folks and I start to clear the path. I walk right up to her and say “Ma’am we have listened to you. We understand this is all a little wild but we have cleared a path for you to leave *my right hand was constantly swinging in motion, showing her the path out we made for her, as shown in the photo*”

I go “Ma’am you are endagering your life doing this. LEAVE. TAKE YOUR HUSBAND AND LEAVE.” (I mean, anyone who knows me knows I get loud, so you know, sorry about that.)

And she won’t. She won’t budge. A young woman comes up to me and says “She wants this. Leave her be.” looks to her and goes “God bless you. I hope you make it home safe.” and I walk away from her astounded.

I have never experienced anything like tonight. To see America rise up for a man who hates so much of it, then for him to get checked so wonderfully by a city I love so much, and then for his followers to scream and cackle to the bitter end.

So many fights were stopped. So many people protected others instead of encouraging mayhem. Don’t believe the hype : protestors only stoked a fire in these people that was born long before they had Trump to personify it.

Hate is real my friends. Vicious, hurt you if you aren’t watching, worse if they can get away with it indignance was in so many eyes there.

I say that bc know this : hope is real too. Hope that when we stand up against hate from time to time, and collectively, we can defeat it. Or at least silence that beast, for one damn night.

We are at a point in America where those people, Trump supporters, make me sad. But the ones who make me angry? The incredibly intelligent, brightest minds I know, who sit on their hands and do nothing, don’t vote, don’t volunteer, and pretend as though their knowledge abdicates them from action.

You don’t have to share my belief in Christianity, but I am asking you to stand up against hate. Or this woman’s slanted arm never bears a greater weight than her own ignorance. She may never get the shot to understand love, living in the world where that symbol actually rules again.

Don’t let that happen. Do something. Please, for the sake of everyone, do something.

Garza was quite happy he and his fellow protesters had cancelled the event:

I have never felt more American. We CANCELLED THE TRUMP RALLY.