Bestselling author and senior editor at Conservative Review, Michelle Malkin, is calling Matt Drudge “anti-Christian” for his choice of headlines regarding an event involving Texas Sen. [crscore]Ted Cruz[/crscore], characterizing it as a “cheap tabloid shot” that exposes “ignorance and bigotry.”

The headline, posted to the Drudge Report Friday, involved a story of Cruz receiving the blessing of Pastor Gaylon Wiley, the man who not only baptized Cruz, but brought his parents, who’d been atheists, into the faith. 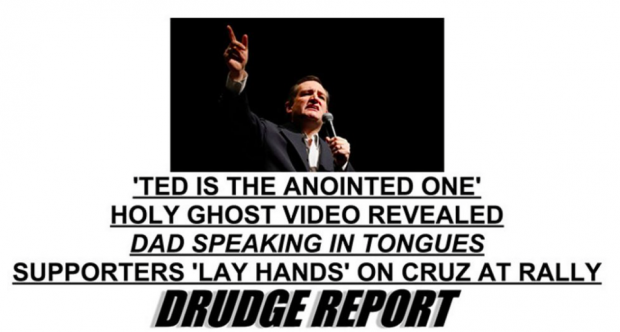 Screen capture from the Drudge Report

[dcquiz] “Laying of hands” on someone who a person is praying for is not uncommon in many faiths and, as Malkin points out in her video, was done for Donald Trump in September of 2015. Malkin called this a “100 point font sized double standard.”

“Funny, but I don’t remember the armageddon-style headlines about Donald Trump having hands laid on him at his Trump Tower just a couple of months ago by Christian and Jewish leaders,” Malkin said. “Holy hypocrisy Drudge, we have enough Christian bashers in the media, Hollywood and the White House. Next time, lay off the ‘laying on’ of the hands.”