With the U.S. Federal Reserve offering dovish signals and central banks all around the world dumping stimulus in desperate attempts to spur growth, it’s not really a surprise that the Dow Jones Industrial Average rallied again today. The question is whether the rumor about a secret deal to prop up markets is true or not. Speculation is flying that the recent dollar decline is intentional – part of a secret “Shanghai Accord” designed to prop up the global markets. It reeks of conspiracy theory, but after seven years in which the Federal Reserve was responsible for 93% of all gains in the market – according to a very reputable research firm – nothing would be surprising anymore. 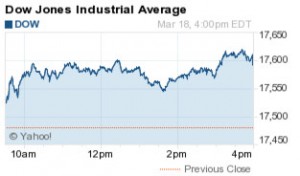 Things keep getting worse for activist investor Bill Ackman. Shares of Valeant Pharmaceuticals International Inc. (NYSE: VRX) fell another 9.1% as concerns about a pending default event are sending investors running for the exits. Money Morning Global Credit Specialist Michael Lewitt has been riding this stock down for six months, but pundits and analysts didn’t believe him. Now, Michael explains how he saw this company’s crash coming, and how we’re preparing to make big returns on the next big short.

On the economic front, U.S consumer sentiment registered lower than economists had anticipated in March. The monthly reading hit 90, which is a five-month low, as consumers grew more concerned about rising fuel costs and prospects for the U.S. economy. Confidence took the biggest hit among low-income earners who were worried about rising prices.

But the big talk today was the ongoing trend of Chinese investors fleeing their homeland to buy up “trophy properties” across the United States. This morning, Starwood Hotels & Resorts Worldwide Inc. (NYSE: HOT) announced it was walking away from a deal with Marriott International Inc. (Nasdaq: MAR) and is instead considering a $13 billion cash deal from China’s Anbang Insurance Group. The Chinese company has been buying up real estate – including the famous Waldorf Astoria – across the United States as they seek a place to put cash while the yuan depreciates. Anbang also recently announced the purchase of Strategic Hotels & Resorts from the Blackstone Group LP (NYSE: BX) for $6.5 billion. The deal turned heads because Blackrock purchased the company for roughly $6 billion just three months ago.