Health-care premiums have steadily risen since the Affordable Care Act’s implementation, according to a study released by pro free-market non-profit Freedom Partners.

President Barack Obama may have promised lower costs for Americans, but numerous studies find Obamacare has accomplished the opposite.

Between 2005 and 2010 – prior to the enactment of the president’s landmark legislation – the annual premium increases on employer-sponsored health insurance for families averaged 4.8 percent. The analysis found premiums went up on average by 5 percent nationally between 2010 and 2015, following the bill being signed into law. 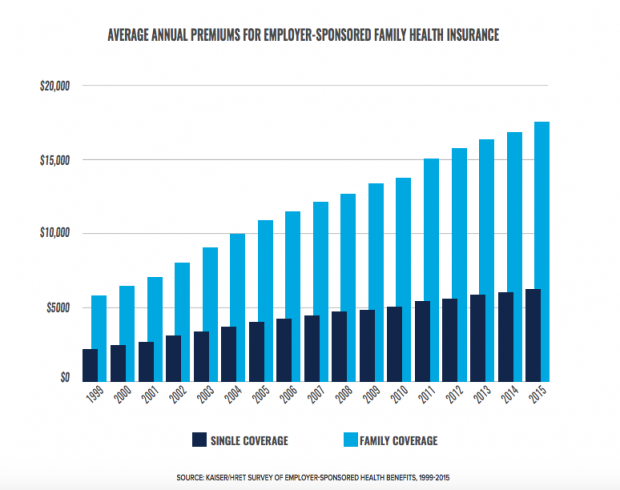 “The EOP’s 2009 report bemoaned a 5.5 percent increase in premiums between 2008-092 , but the first year after Obamacare was enacted, premiums increased by 9.4 percent from 2010-11,” the report, released Wednesday, reads. “Since that time, the upward trend in prices has continued. From 2014-15, the average annual family premium for employer-sponsored health insurance increased 4.2 percent to $17,545.30.”

According to the organization, premiums have also shot up faster than wages on the state level with premiums increasing by an average of 27.9 percent while wages increased by just 7.8 percent between 2009 and 2014.

“The Administration claimed the ACA would bend the cost curve, but our report shows it bent in the wrong direction – premiums didn’t slow down under the Affordable Care Act, they sped up,” Freedom Partners Senior Policy Adviser Nathan Nascimento said in a statement. “No wonder the White House is trying to change the national conversation away from health care costs. By their own standards, the Affordable Care Act has failed.”