Yeah, we know what Donald Trump is thinking. The ladies of “The View” are total losers. Especially today, as they invited former GOP presidential hopeful Ben Carson on the show and practically scratched his eyes out for endorsing Trump.

Host Whoopi Goldberg, who has sparred with Trump before, tried to appeal to Carson’s own morality.

“Sir, I hate to ask this question but you have aligned yourself with a man who has bashed women, made countless racist remarks,” she began. “You’re Ben Carson. Why would you align yourself with that?”

Amid a lot of whining and interrupting from Whoopi and the other hosts, Carson tried to explain himself.

“You have to look at the good and the bad,” he said. “There is no perfect person. I have met a lot of his employees, including African Americans, and they have nothing but good things to say. …One of the ways you measure a person is looking at their children and how they act. They have been raised very well, they’re very respectful.”

To Whoopi’s ears, that was a whole lot of nonsense.

“You can say this until the cows come home,” she said, her anger increasing wildly. “This guy is a racist and he’s not good for the country. YOU’RE BEN CARSON. YOU’RE SO MUCH BETTER THAN THIS!”

Carson remained permanently Xanaxed. “I look at the big picture. …right now the nature of our country is at stake,” he said. “We are on the precipice. If it were about me, I would be offended. This is about America. …The reason again that I am endorsing him is we are heading down the exact same path we’ve been on all along.”

Host Joy Behar informed Carson that it was about him and that Trump has referred to him as a child molester.

“Tell me a politician who doesn’t tell lies,” Carson replied.

The sea parted. A glorious moment of agreement ensued.

“The lying he does is continuous. …He’s got a long Pinnochio nose,” said Joy.

Carson said Trump has made no promises about him being a member of his administration.

At the close of the show, Whoopi announced that Trump had tweeted about them.

“We just were made aware that Donald Trump is tweeting about us,” she said and immediately struck back: “Actually hashtag 20th season Donald, coming up.” 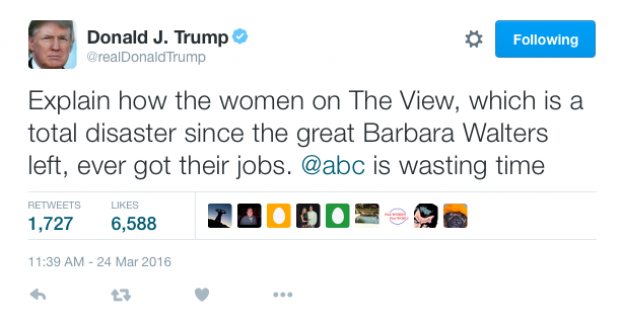 Whoopi baited Trump about his refusal to come on the program: “Well Donald, the reason you keep saying no is because you don’t think you can face our questions. Avoiding the situation doesn’t make you look stronger, babe.”

This is when all hell broke loose among the hosts. Particularly Paula Faris, a correspondent for ABC News, who doesn’t think the hosts have been so fair with all of the political candidates.

“I don’t necessarily think it’s fair,” Faris said, directing her remarks at Whoopi. “You don’t support him. …Will we be fair?”

Faris said she believed the hosts were tougher on Carson than they were on other candidates — obviously referring to Democrats Bernie Sanders and Hillary Clinton. “I don’t think that we are on certain candidates than we are on others,” she said.

Whoopi exploded, yelling, “WHAT ARE YOU TALKING ABOUT?”

Whoopi tried to reason her way through her anger.

“I take offense when people are racist,” she said. “Nobody here has been crappy to any of the people who have come, including the people we really didn’t like.” (Yeah, yeah, right. Who is she kidding?)

Faris didn’t back down. “As a journalist I also know you have to give people to tell their story instead of becoming the story every time. …Trump you have an open invitation.”

Behar made the asinine remark of the day, saying, “That’s the way the cookie crumbles.” (She explained that Trump says crazy things and they react.)

Whoopi had daggers in her eyes as she looked at Faris during their argument.

Faris could be seen giving host Raven-Symoné a long hug as the show wrapped.