Sure, terrorists who just happen to be Muslims shouldn’t kill people. But does that give you the right to tweet offensive things about Muslims?

Not in England, it doesn’t. Thomas Burrows, Daily Mail:

A PR boss who asked a Muslim woman to ‘explain Brussels’ has been arrested on suspicion of inciting racial hatred.

Matthew Doyle, an LSE alumnus and partner at a south London-based talent agency, sparked outrage on social media after he ‘confronted’ a Muslim woman about the Brussels attacks which killed 34 people… 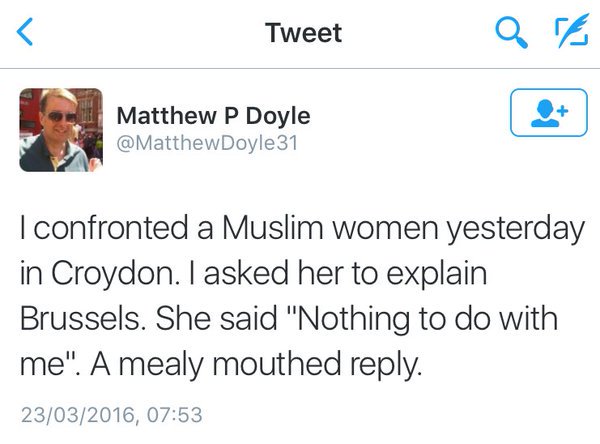 His initial post was followed by a number of like-minded tweets such as ‘no more Muslim migration’ and ‘Trump for president’.

Okay, so the guy’s a jerk. A troll, a wanker, whatever you want to call him. He’s an unpleasant person. And he can’t spell. But is that really so rare, in England of all places, that it warrants arresting him?

I’m fed up with Muslims making themselves the victims every time there’s a terror attack. I also think this guy is a dickhead. I also also think if you start criminalizing free speech like this, it’s a slippery slope. This man has the right to be a dickhead, and so does everybody else. (For which I am forever grateful…)

People tweet crappy things about Christians and white people and Republicans and other undesirables every day. They don’t get arrested for it, nor should they. But the minute a Designated Victim is offended, look out.

If you’re glad this guy got arrested for saying something you don’t like, watch your back. You could be next.