A majority of Americans agree with billionaire businessman and Republican presidential front-runner Donald Trump that the U.S. should institute a temporary ban on Muslims entering the country.

When polled if there should be “a total and complete shutdown of Muslims entering the United States until our country’s representatives can figure out what is going on,” 51 percent of respondents said they agree.

“This is slightly up from the 45 percent support when the question was first asked after Donald Trump proposed the ban in December 2015,” writes YouGov’s Peter Moore. “This is largely a result of a big jump in support for a ban among independents (42 percent to 62 percent), as Democratic opposition and Republican support is largely unchanged over the last four months.” 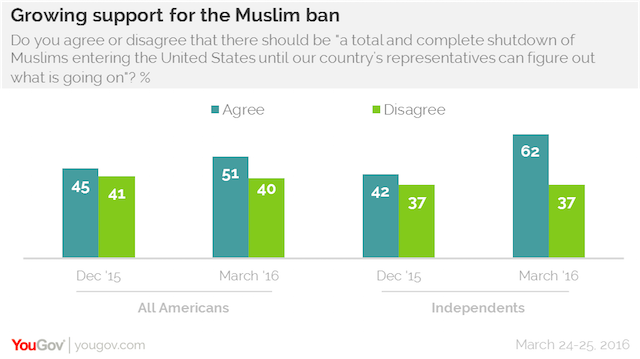 The YouGov/Huffington Post research also surveyed attitudes toward Sen. [crscore]Ted Cruz[/crscore]’s suggestion that law enforcement needed to be empowered to patrol and secure Muslim neighborhoods and whether Muslim communities should be subjected to more intense surveillance.

“The public is divided on whether or not law enforcement should ‘patrol and secure’ Muslim neighborhoods in the United States. 45 percent support it while 40 percent oppose it, with most Democrats (57 percent) opposed and a large majority of Republicans (74 percent) in favor of the policy,” writes Moore.

Trump sparked both outrage and support when he proposed the travel ban for Muslims back in December. His proposal was deemed so outrageous the UK parliament held a debate on whether to ban him from entering the UK. The petition was triggered by a petition that gathered more than 100,000 signatures.