For years, black activists have said that a lack of access to education causes much of the chaos and violence in the inner city, but now that many have been ushered into educations at the nation’s most elite colleges, more than a few seem to want to go back to ghettos.

Alanna Hardy, a black student at the University of Rochester, a $64,000-a-year private school in New York, recently lamented having to spend time at the “barren, racist wasteland that is the U of R.”

Another, Charlisa Goodlet, said that she is a “prisoner within my own city” by having to attend the elite college.

Both live in a blacks-only on-campus mansion that was built by a fraternity and then seized by the school and made into a dorm called the Frederick Douglass Leadership House. Hardy called the segregated dorm an “oasis” where she could recover from the pain of having to be near whites and Asians while walking to class.

There has been only one significant act of violence recently on campus. In December, a black student on athletic scholarship at the school tried to knock out and rob black drug dealers, causing the dealers to retaliate by kidnapping innocent students — one white, one foreign–holding them in a dungeon and allegedly sodomizing them.

Nonetheless, university president Joel Seligman shook her hand and thanked her for having the “courage and dignity” to speak up, promising the school administration deals severely with race-based incidents.

Weeks before at the same school, a member of a fraternity popular with athletes, who was being arrested for intoxication, claimed that the arresting officers screamed racial epithets at him. School administrators said the charges were so serious that the officer might be fired. The student then admitted that he was lying, and the school quietly closed the matter.

Hardy and other black students were meeting with Seligman to lament a lack of focus on their contributions to the school and because they were angry that it is technologically impossible for the college to block the website Yik-Yak from the public’s cell phones. (Seligman said that as a compromise, he would send troublesome Yik-Yak posts to criminal prosecutors.)

Hispanics, Asians and Arabs had little interest in joining the airing of “minority” grievances, and one of the few Hispanic representatives, David Gonzalez, who grew up in Mexico, scoffed at the idea that there was physical, race-based danger on the bucolic campus and wondered where their demands would end if Seligman gave in.

Activists have focused on the supposed plight of black college students who are more privileged than the vast majority of Americans — attending universities that cost well over $50,000 a year, often on scholarship — rather than the many  in objectively worse situations because the colleges are willing to entertain groundless complaints, Ben Shapiro told the Daily Caller News Foundation in an interview Tuesday.

“They pick the most leftist institutions they can find and call them racist because if these places are hotbeds of homophobia and racism and sexism and bigotry, then the rest of America must be so much worse,” he said. The 32-year old conservative commentator is on a speaking tour of campuses saying that vague, unproven grievances are not something to glorify.

When his anti-political correctness speaking tour hit George Washington University Tuesday evening, the segregation mentality was also on display at the D.C. university.

At other campuses he has spoken at in recent months, Shapiro has been met with massive protests in which leftist students forcefully blocked entrances and pulled fire alarms. At GWU, there was only quiet — because would-be protesters were all siloed away into offices in the student center based on demographic characteristics.

Those who didn’t fit cleanly into a group even formed their own, the Racially and Ethnically Mixed Student Association, which also met that day.

GW’s Black Student Association lists 16 other groups that blacks can join on the campus, including living in the “Blackhouse.”

At Shapiro’s GW speech, the crowd of supporters was 150 past capacity. But those who might have dissented with his viewpoint didn’t seem to engage with outsiders enough to be aware of what his message is, much less protest it. There were only two or three black students in Shapiro’s audience.

“Who Ben Shapiro?” one black student asked another outside the Marvin Center.

The four police officers protecting him seemed bored as he spoke about how “white privilege” doesn’t cause black men to abandon their black girlfriends after impregnating them.

A vintage quilt served as a time capsule of college clubs of yesteryear — school spirit, proclamations about giving back and loving the District of Columbia, and humanitarian efforts like AIDS walks and caring for the homeless.

But in the cubbyhole offices across from it, occupied by the various student groups, the present situation was vastly different. A long hallway was filled with legions of offices for groups based on sex and race characteristics.

And for all the proclamations about how important it is that virtually all Americans go to college, there was little evidence of serious rhetoric or hard work that would translate to a lifetime of productivity, even at the highly-ranked GWU.

The Racially and Ethnically Mixed Student Association gatherings consist, for example, of mind-challenging activities like watching Rush Hour, an action movie that happens to star a black man and an Asian man.

The Association of Queer Women and Allies passed out “free contraception” and touted its office as a “safe space.” (It is unclear why the lesbians thought they needed contraception.)

In the hallway, a student picked up a red phone and barked to a maintenance person: “The College Democrats need room 407 unlocked.”

Outside the lecture hall, two black students, seemingly unaware of the speech, played with children’s toys.

“The problem with college is not that not enough people are getting in, it’s that they’re not teaching people anything, at least if you are a poli-sci or English or lesbian dance theater major,” Shapiro said.  “There’s a good case to be made that if you’re going to spend $120,000 on your kid, then you should give your kid $120,000 to start a business.” 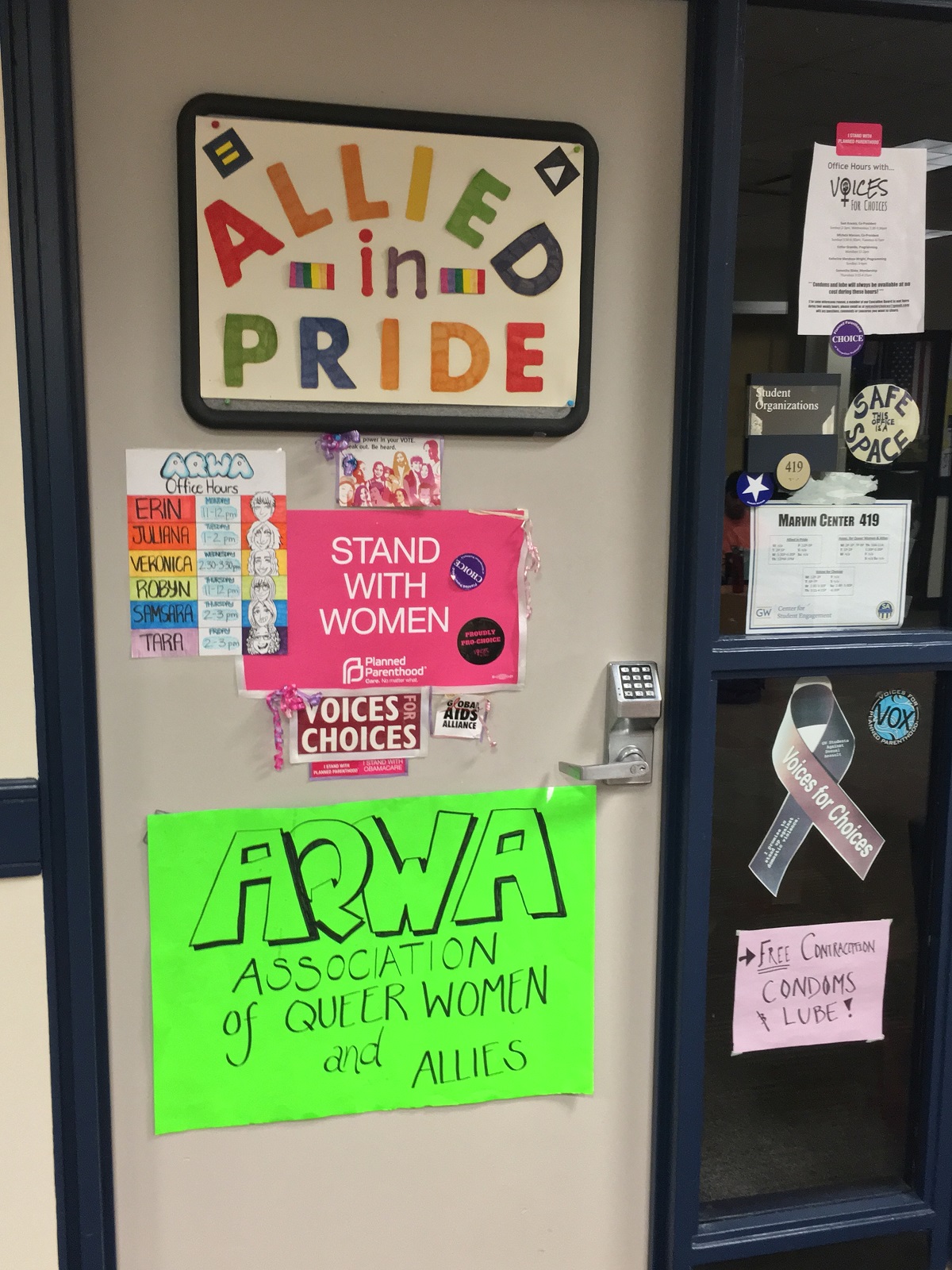