Digital ads for presidential candidates are showing up next to Islamic State propaganda on YouTube, as well as videos pushing illicit activities, such as financial fraud and hacking techniques.

While running an Islamic State propaganda YouTube video, researchers investigating these instances encountered a pop-up ad run by Google featuring a picture of Democratic candidate Hillary Clinton and the words, “Confirm where to vote for Hillary on March 1.”

Digitial Citizens Alliance researchers found hundreds of examples of these juxtapositions leading up to the New Hampshire, South Carolina, and Virginia primaries, and detailed some of their findings in a report titled “Fear, Loathing and Jihad,” obtained by The Daily Caller News Foundation.

“If this is happening to presidential candidates on YouTube, it can happen to anybody,” Adam Benson, the group’s deputy executive director, told The Daily Caller News Foundation. “Corporations, associations, non profits work very hard to build a brand, and this is the kind of thing that having this show up chips away at that brand.”

Google and YouTube have taken some steps toward fixing this kind of problem, which not only threatens the organizations that pay for the ads, but also Internet users who might see it as a sign that the site or video it’s paired with is legitimate. But Benson told TheDCNF they could do more to stop it from happening, such as committing human teams to the job rather than bots and allowing advertisers more control over where their ads show up.

Ads paid for by all five remaining presidential candidates and their Super PACs were placed by Google or YouTube variously next to ISIS videos, Ku Klux Klan propaganda, hacking and identity theft how-tos, and other videos promoting illicit activities. The creators of some of these videos are apparently receiving a cut of the advertising profit, in accordance with typical Google advertising and partnership policy.

The users are all part of YouTube’s partner program, meaning they have given YouTube permission to place ads in or near their video, in exchange for a share of the profits via a Google account, the researchers found. The YouTube partner program guidelines say each video must be approved for monetization to enable advertising, so that the “partner” can receive a portion of the profits.

Incidentally, the 2016 election season is proving to be a massive boon to YouTube, according to the company’s latest report, as detailed by Wired. Since candidates began announcing their campaigns in April of last year, YouTube viewers have watched 110 million hours of candidates and issue related content, which includes ad content.

That’s close to a 500 percent increase from last April, and about 100 times the amount of content airing on CNN, C-SPAN, MSNBC and Fox News combined. Political ad spending on Youtube has jumped close to 300 percent since October.

Still, for campaigns, the online video property is an increasingly attractive alternative to television and an important platform for getting a candidate’s message out, both through the candidate’s own YouTube channel and (luckily for YouTube) paid advertisements. That’s true across digital platforms. According to one recent study, in 2016, $1 billion will be spent on digital ads this cycle, a 5,000 percent increase from 2008.

YouTube is already seeing the fruits of that growth. Since October 2015, political ad spending for YouTube has grown 294 percent. And before the early primaries and caucuses, the platform maxed out its ad inventory in Iowa and New Hampshire, for the first time, as well as South Carolina and Nevada.

One key reason for the boon is the fact that advertising rates on television are exorbitant.

Digital Citizens Alliance is not able to determine how much these video creators could be profiting because Google has not provided numbers or specific information regarding its revenue in such cases. “We don’t really know, and we’re not the only ones asking,” Benson told TheDCNF. “We have never really gotten a great answer from Google or YouTube about that.”

“Vote Trump,” reads a banner ad that appeared next to two more ISIS-related videos, one featuring the ISIS flag and another produced by its propaganda arm. It’s unclear who paid for the ad, but it redirected users to Donald Trump’s official campaign website.

“What are the barriers to entry to an ad like that going up?” Benson told TheDCNF, raising a concern that opponents of a campaign or organization could exploit the ad program to mislead or deceive viewers. 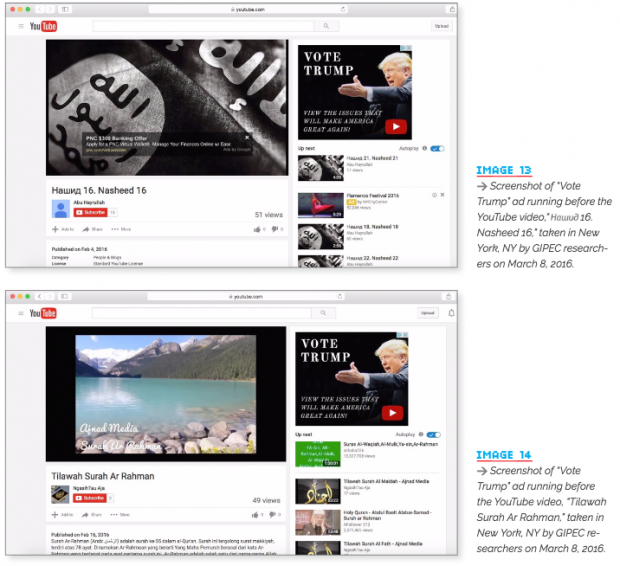 Ohio Gov. John Kasich is running on a platform of fiscal competence and credibility, but a banner ad from his campaign showed up next to and within a video about fake credit cards used by fraudsters to launder money. “John Kasich never gives up,” the banner ad says, featuring a picture of Kasich and a map titled “JOBS TO USA.”

Other ads for candidates showed up next to videos explaining how to take over people’s computers and take pictures, send emails or browse the web without them knowing. Hackers can then steal money or documents or use their control of the computer to blackmail the person or demand money.

Digital Citizens Alliance is a nonprofit made up of a coalition of consumers, businesses, and Internet experts focused on educating the public about Internet risks and making the Internet a safer place.

“Ads, especially those from companies or people we know and respect, can validate the programming surrounding them,” the report reads. “What could be more validating to content than an ad from a Presidential candidate?”
TheDCNF reached out to candidates about their ads appearing next to ISIS propaganda, but none of the candidates commented by the publishing time. Google did not admit or deny the report, but told TheDCNF in a statement they have policies in place to prevent this kind of occurrence.