In response to a proposed guidance from the state’s Board of Education that would pressure schools to let children choose their gender-assigned bathroom of choice, Michigan parents, teachers and students have flooded the Board with pleas to change the policy.

At time of writing, almost 6,000 comments had been submitted to the Board of Education on EveryVoiceCountsMi.org, far more than the dozen or so comments usually left on proposed policies.

Many of those commenting on the guidance are mothers afraid for their daughters’ safety and privacy, some accusing the Board of inviting sexual harassment upon young girls.

“I have a daughter and she deals with sexual harassment enough having to pass boys in hallways who think saying, ‘I’d tap that,’ is acceptable,” one mom wrote. “Now if they claim their name is Sarah they can get into a shared locker room while my daughter is suppose to change? This will come back to bite you, I can guarantee that. The first time anything happens to any student there will be a rally of parents demanding action.”

Another mother shared how her young daughter was already concerned about possibly having to change in the same room as boys: “My 11 year old daughter has asked that if this passes, if we can move out of Michigan because boys do not belong in her changing room or bathroom period! She should feel safe in school, with girls and girl parts only in her dressing room!”

One commenter pointed out that many of Michigan’s smaller school districts have middle-schoolers and high-schoolers all in the same building. “Are you really encouraging a 12 year old female-to-male transgender to share a bathroom with an 18 year old male who will be using a urinal?” the mother wrote.

Another mother wrote: “I am deeply disturbed over the loss of parental rights on this issue. My child is a legal minor until the age of 18. The school board has no right to take away my rights as a parent to decide what is best for my child. This bill needs to be rewritten and take into consideration that as a parent I AM THE LEGAL GUARDIAN of my child NOT THE SCHOOL BOARD.”

Many of the parents commenting have threatened to pull their kids from the state’s public schools if the Board passes the guidance, which one father called “a slap in the face to all parents.”

If the guidance passes, one mother wrote, “I will withdraw my child from public schools. I feel like my daughter’s rights and laws are not being protected.”

Another mother wrote: “I don’t disagree that students who feel they need to change or use the facilities in a different bathroom than their biological gender should have a place to go. I just don’t believe it should be in the same facility as my 5 year old daughter. If this passes through, my child will not be attending public school.”

Another commenter, who identified himself as a gay father, called the proposed guidance “total nonsense” and said that his children will be “attending a charter school that will respect THEIR feelings, needs and sensitivities” it passes. 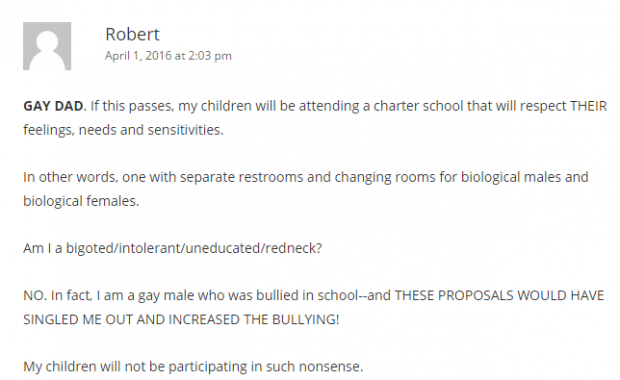 Not all commentators opposed the policy, however.  One man who identified himself as a gay former student wrote that “to prevent someone from using the bathroom just because they were born in the wrong body is the most ignorant thing I have ever seen in my 29 years of existence.” He went on to warn opponents of the guidance to “prepare yourselves for the biggest shit-storm imaginable.”

The Board of Education, which contains three times as many Democrats as Republicans, will decide on May 11 whether or not to push forward with the guidance.