The Knight Foundation released a poll Monday revealing college students support bans on certain forms of expression but by and large they support the First Amendment.

The poll comes after countless campus protests whether over perceived racial slights on campus or folks drawing Donald Trump’s name in chalk.

When it comes to the security of First Amendment rights, press, speech, assembly, religion and petition the government, among all U.S adults are more worried than students.

U.S adults also differ sharply from American colleges students on whether “American’s ability to exercise their free speech rights is stronger, about the same or weaker than it was 20 years ago?” Thirty-one percent of adults think it is stronger and 40 percent of them think weaker. On the other hand a majority college students, 51 percent, thought over the past 20 years Americans free speech rights have been strengthened.

The divide between college students along racial lines continues when the issue of restricting speech that might be offensive to certain groups is brought up. Forty-one percent of black students support such restrictions, while 24 percent of whites do. 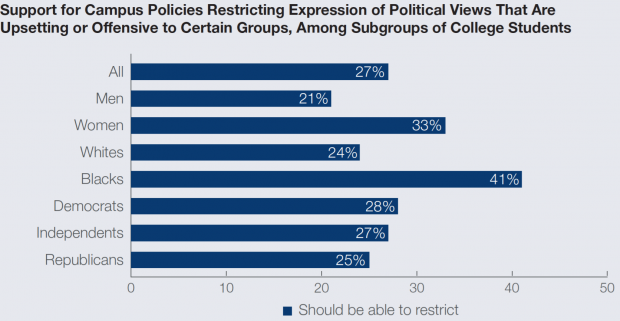 A majority, 78 percent, support an open environment. In fact, college students support a campus without restrictions on speech more than U.S adults by 12 percent.

College students also come to a consensus in believing that colleges should be able to restrict slurs that are “intentionally offensive” and costumes that stereotype racial or ethnic groups. Nearly 70 percent of students think intentionally offensive speech should be able to be restricted and 63 percent are open to restrictions on stereotypical costumes.

In the wake of the University of Missouri campus protests which featured a college professor asking for “muscle” to remove a journalist, questions have arisen about college students views on freedom of the press.

According to the poll, 70 percent of college students are against restrictions on reporters covering protests. Again here, the poll finds that adults are more averse to the First Amendment compared to students.

However, when confronted with hypothetical scenarios students are more open to restricting the press. 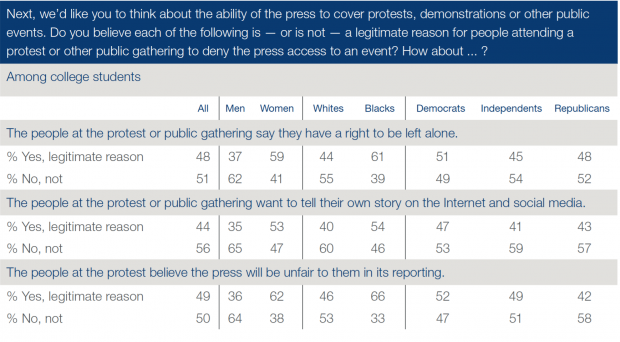 The poll has a margin of error of three percent.