In the time span of a 60-minute podcast interview with Politico‘s Glenn Thrush, Democratic presidential hopeful Hillary Clinton used the phrase “you know” at least 80 times.

Seems she has a verbal tic, you know?

The phrase takes on a variety of meanings. But in all cases it appears to be some kind of security blanket.

Sometimes it happens at the onset of an answer, such as in her first response, when she replied, “You know, Glenn…” In another instance it’s plopped into the middle of a sentence and adds absolutely no real meaning to her answer. In this example, the “you knows” arrive in sandwich formation:

“SEC. CLINTON: I mean, how it works, how the whole, you know, science of it, you know, aerodynamics, you know, actually manages to keep us afloat. I’m constantly amazed.”

“SEC. CLINTON: –that played with us, and I was shaking their hands, and there was one young man whose head was just down. He looked so depressed, and I thought, “Wow, you know, I guess he doesn’t want to shake my hand.” Then he kind of lifted his head, and his teacher was standing there, and the teacher said, “Don’t worry about it. It wasn’t that big a mistake.” And I could tell this kid was devastated.”

It’s everywhere. She even has friends saying it to her.

“SEC. CLINTON: It absolutely took years. And it was funny because a lot of people picked up on it, mostly my friends and supporters who would say, “You know, you’re not campaigning for somebody else. You’re actually campaigning for yourself.” 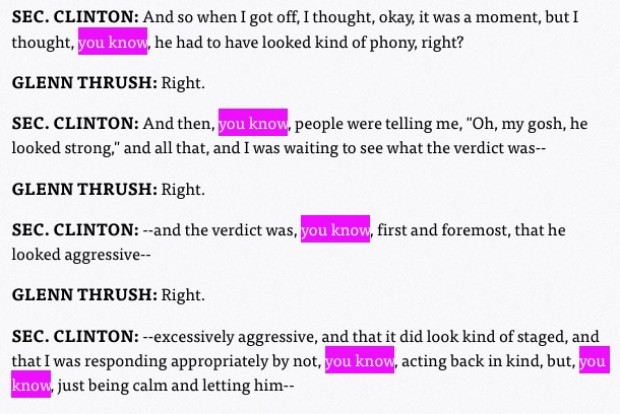