The Washington, D.C.-based nonpartisan think tank said Americans will pay a total of $4.9 trillion in taxes this year – 3.34 trillion in federal taxes and $1.64 trillion in state and local taxes. The combination of the three basic necessities totals $4.105 trillion, with $1.629 trillion spent on food, $360 billion on clothing and $2.117 trillion on housing. 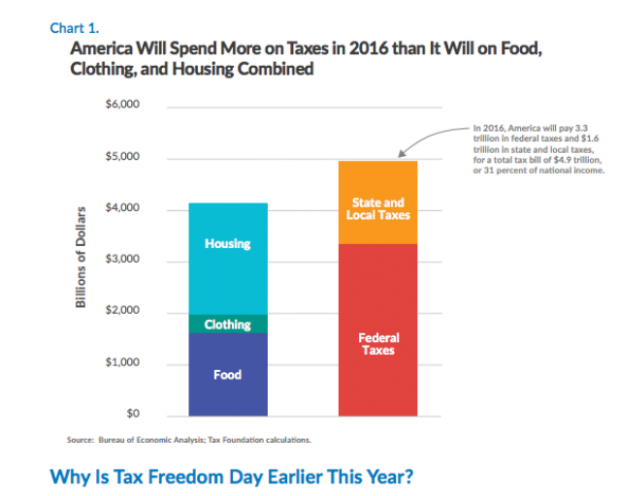 Tax Foundation is the creator of Tax Freedom Day, which is “when the nation as a whole has earned enough money to pay its total tax bill for year.”

[dcquiz] According to its calculations, which take federal, state, and local taxes into account and then divides by the nation’s income, the date will fall on April 24. If federal borrowing was tacked on, an additional 16 days would be added.

“Tax Freedom Day gives us a vivid representation of how much federal, state, and local tax revenue is collected each year to pay for government goods and services,” Tax Foundation Analyst Scott Greenberg said in a statement. “Arguments can be made that the tax bill is too high or too low, but in order to have an honest discussion, it’s important for taxpayers to understand the cost of government. Tax Freedom Day helps people relate to that cost.”

This year’s Tax Freedom Day falls one day earlier than 2015.