The United States issues twice as many green cards to migrants from Muslim-majority countries than from Europe, adding to a Middle Eastern migrant population in the country that is one of the fastest growing demographics.

The numbers are illustrated in a chart below by the Senate Subcommittee on Immigration and the National Interest, obtained by The Daily Caller News Foundation. If laws are not changed, the U.S. is expected to issue another 680,000 green cards in the following five-year period. 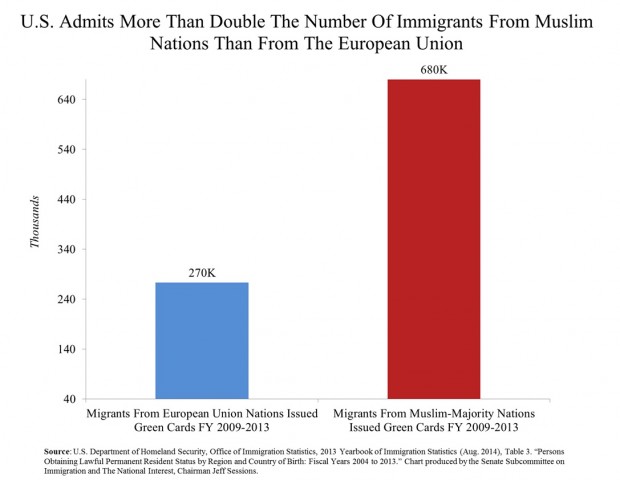 Senate Subcommittee on Immigration and the National Interest

Although Muslim-majority countries are not the biggest senders of migrants to the U.S., the population of migrants from that region is one of the fastest growing, alongside a relatively small European migrant population.

Mexican immigrants still make up the largest portion of the immigrant pie, but the Middle East immigrant population in the U.S. is growing at a faster rate, reported the Center for Immigration Studies (CIS) in September based on an analysis of recent Census data. Immigration from Saudi Arabia is up 93 percent, from Bangladesh up 37 percent and from Iraq up 36 percent, reported CIS. On the other hand, immigration from countries like China, which is one of the top senders numerically, grew by 16 percent.